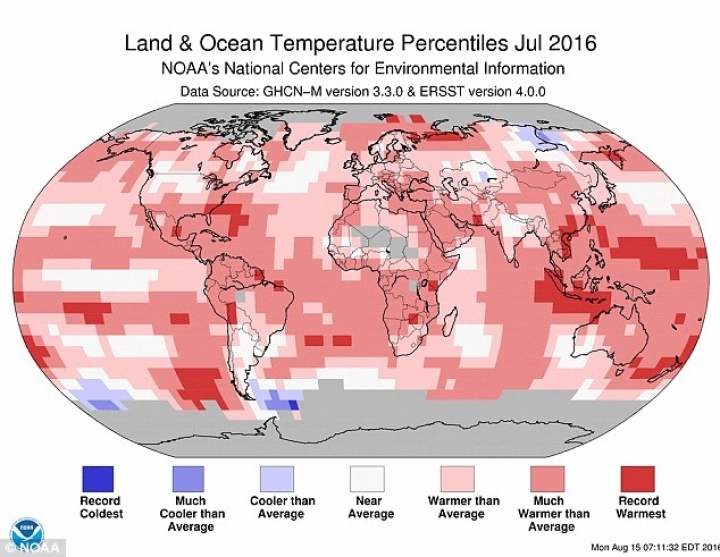 July marked the Earth's hottest month in modern times, setting a new high mark for global heat in 137 years of record-keeping, US government scientists have confirmed.

In its monthly report, the National Oceanic and Atmospheric Administration said the global average of temperatures taken over land and ocean surfaces for July 2016 'was the highest for both the month of July and for any month in the NOAA global temperature dataset record, which dates back to 1880.'
Last month's temperature across global land and ocean surfaces was 1.57 Fahrenheit above the 20th century average of 60.4 degrees F (15.8 Celsius).

It also marks the 15th consecutive month of breaking monthly temperature records, 'the longest such streak in the 137-year record,' NOAA said.
The new record beats out July 2015, the previous holder for the planet's warmest month.
July 2016 marks the 40th consecutive July with temperatures at least nominally above the 20th century average.

He added that there was a 99 per cent chance that 2016 would now break annual global temperature records.
It comes after many parts of the world have experienced 'oppressive' levels of heat, according to Nasa's Earth Observatory.

'The scary thing is that we are moving into an era where it will be a surprise when each new month or year isn't one of the hottest on record,' said Chris Field, a climate scientist at the Carnegie Institution and Stanford University.