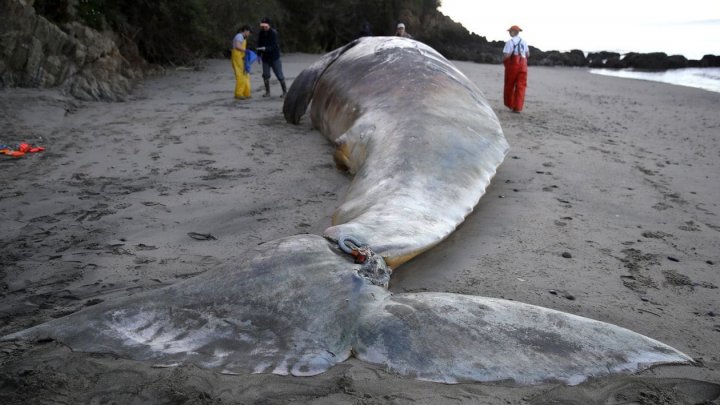 It’s been a gloomy year for gray whales in California. In a little less than two months, nine of the marine mammals have been found dead in the San Francisco Bay area, an unusual string of fatalities that experts say has primarily been caused by boat strikes or malnutrition, reported washingtonpost.com.

“It is very unusual. A normal year for us, we have maybe between one and three [dead] gray whales in this season,” said Pádraig Duignan, chief research pathologist at the Marine Mammal Center. “This is triple that already, in less than a two-month period.”

Four of the nine whale deaths counted and studied by the Marine Mammal Center since March 10 were determined to have been caused by malnutrition, while three were caused by ship strikes. A ship strike is suspected to have killed a fourth whale, and the cause of death for one animal, found April 30, has not been determined.

The latest whale, a female discovered May 6 at San Francisco’s Ocean Beach, had probably been killed by a passing boat.

“It looks very much like a blunt force trauma injury that took her life,” said Duignan, who performed a necropsy Tuesday. He also noted that “she was in poor body condition, [with a] depleted blubber layer and no internal body fat relative to what an adult female should have at this time of year in this area.”

The Marine Mammal Center works with institutions such as the National Oceanic and Atmospheric Administration, the California Academy of Sciences and scientists in other regions of California to monitor how whales and other Pacific Ocean life are faring. And biologists have observed a disturbing trend of malnourished gray whales up and down the coast this year, Duignan said.

In Washington state, 13 dead gray whales have washed up on state beaches since April, KOMO News reported Tuesday. Starvation was also suspected as playing a role in those deaths.

Gray whales migrate south for the winter to have calves in Baja California, Mexico, before heading back up to Alaska along the coast in the spring. They pass through California waters between December and January, and again in April and May. Their round-trip journey measures an astonishing 11,000 miles, the longest of any yearly whale migration.

They primarily feed on small invertebrates that live in ocean sediment, and do much of their feeding during the summer season in Alaska.

But this year, Duignan said, by the time they’re reaching the Bay Area again in the spring, the whales "have run out of fuel." Scientists have observed them feeding in the San Francisco Bay, which is highly unusual.

"The hypothesis is that last summer, these whales were in Alaska and they either had to travel or there wasn’t enough prey to get them fat enough for the migration," said Moe Flannery, collections manager of ornithology and mammalogy at the California Academy of Sciences.

She said counterparts in Baja California were reporting that the whales were arriving later, having fewer calves and giving birth in the ocean rather than in much safer lagoons. And they, too, appeared diminished.

While gray whale populations are stable, California’s shifting ocean climate and a warming Alaska could be putting pressure on the animals this year.

"Alaska has experienced the largest regional warming of any state in the United States", according to the NOAA, and its marine systems are "highly susceptible to climate change."

On Monday, the same day that the latest dead whale was discovered on a California beach, the United Nations released a startling report, finding that 1 million species were at risk of extinction because of human activity.

“The health of ecosystems on which we and all other species depend is deteriorating more rapidly than ever,” panel chair Robert Watson wrote in a statement accompanying the report.

While Duignan said more research is needed to get to the root causes of the whale deaths, he did not contest that human interference played a role.

“The whales that are being killed by ships are a direct human impact,” he said. “The other ones that are malnourished, we don’t know exactly what that is, but it’s quite possible that the global warming effects are having an impact.”