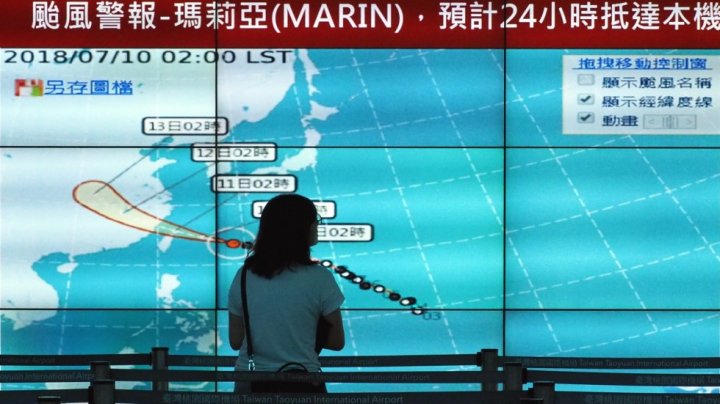 Schools and offices across Taiwan have been ordered to close and hundreds of flights have been cancelled as the island braces for a powerful and life-threatening typhoon, writes Independent.

Soldiers are on standby amid fears of landslides and flash floods as Super Typhoon Maria bears down with 130mph winds and torrential rain.

The Central Weather Bureau said the north and east of Taiwan would bear the brunt of the storm, expected to make landfall at 5pm local time (9am GMT).

The government has told schools and offices in the north-east to shut by by 4pm and more than 30,000 troops have been placed on standby.

“We urge the public to be vigilant and to co-operate with any preventative evacuation,” interior minister Yeh Jiunn-rong said.

Airlines have cancelled at least 250 flights out of Taoyuan International Airport, close to the capital Taipei, while ferry services have also been suspended.

“Mudslides are a serious concern in the higher terrain,” he warned, adding that the typhoon “threatens lives”.

Taiwan is frequently hit by typhoons during the summer, but the devastating impact of Typhoon Morakot in 2009 prompted the government to review the way potentially severe storms are handled.

The government was widely criticised for its slow response to the disaster and has since stepped up preparations and adopted a more cautious approach to the typhoon season.

On Sunday Maria reached Category 5, meaning sustained winds of more than 157mph, before being downgraded to Category 4 on Monday.

The storm is also on course to lash Japan's Ryukyu Islands before barrelling into China, south of Shanghai, on Wednesday.