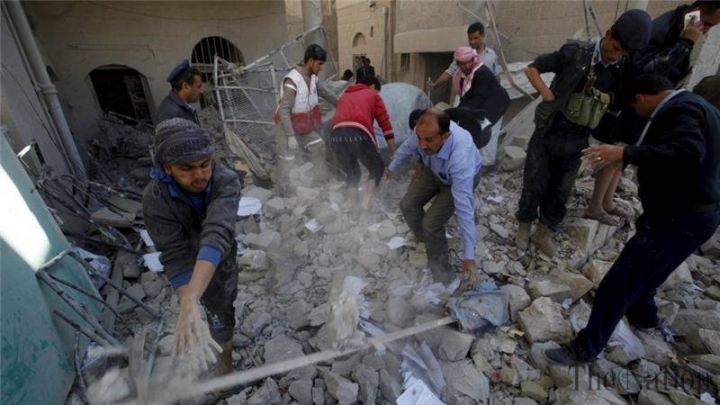 A Saudi-led coalition air strike killed nine civilians outside the Yemeni capital Sanaa on Sunday night, residents said, as forces loyal to the exiled government stepped up an offensive in the area, reports Reuters.

The strike hit Odhar village in the Nehm area, which has been at the center of renewed fighting between supporters of President Abd-Rabbu Mansour Hadi's government and Iran-allied Houthi forces.

U.N.-backed peace talks to end Yemen's conflict broke down over the weekend, and pro-government forces said they had begun an offensive to retake Sanaa.

Two residents of the Nehm area reached by telephone said four people returning from a market were killed when their vehicle was hit as it passed a grocery store. Five people in the store also died in the air strike, they said.

Saba, the state news agency run by the dominant Houthi movement, said 12 people died including six members of the same family, and that some bodies were burnt beyond recognition. The agency said 17 others were wounded.

A spokesman for the Saudi-led coalition referred inquiries to the Yemeni government. A government military spokesman said he was checking the report.

At least 6,400 people have been killed in Yemen's 16-month war, half of them civilians, according to the United Nations.

Comments to Reuters from rights groups and witnesses at the time of the attacks suggested they had together killed hundreds of civilians.