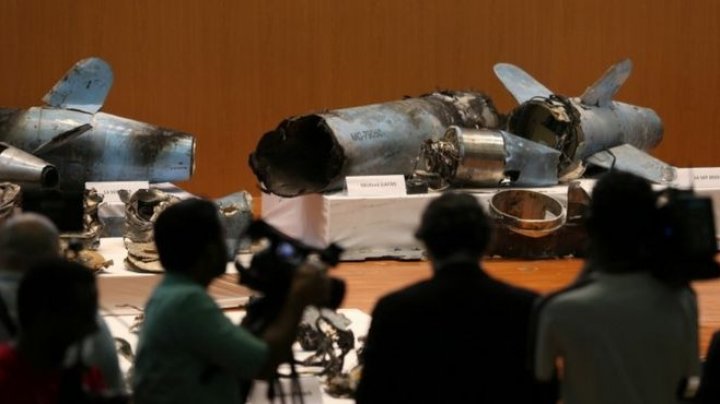 Saudi Arabia's defence ministry has shown off what it says is wreckage of drones and cruise missiles that prove Iranian involvement in weekend attacks on two oil facilities.

It said 18 drones and seven cruise missiles were fired from a direction that ruled out Yemen as a source, writes BBC.

Yemen's Iran-backed Houthi rebels had said they were behind the attacks.

Iran has denied any involvement and warned it would retaliate against any military response.

The Saudi defence ministry briefing said the wreckage showed the attacks were launched from the north and were “unquestionably sponsored by Iran”.

Col Malki showed off what was said to be a delta wing of an Iranian UAV (unmanned aerial vehicle) along with other weapons debris.

"Data recovered from the computers [on the UAV] shows it's Iranian," he said.

He said that 18 UAVs had been fired at the Abqaiq oil facility and seven cruise missiles had been launched at both targets. Four cruise missiles struck the Khurais oilfield and the other three fell short of Abqaiq.

Col Malki said the missiles that struck all hit from a northerly direction. He showed video of one UAV hitting Abqaiq, along with maps and photographs of the damage.

He said of the Khurais attack that the "precision impact of the cruise missiles indicate advanced capability beyond the Iran proxy's capacity".

Col Malki said details of the launch points could not yet be given but once they had been determined they would be announced at another conference.

However, he said: "Despite Iran's best efforts to make it appear so, their collaboration with their proxy in the region to create this false narrative is clear."

He called the attacks "an assault on the international community… Those responsible should be held accountable for their actions".

President Donald Trump earlier on Wednesday announced he had instructed the Treasury to "substantially increase US sanctions" on Iran following the attacks.

The scope of any new sanctions was not immediately made clear.

US Secretary of State Mike Pompeo is due in Saudi Arabia on Wednesday to meet King Salman's son, Crown Prince Mohammed bin Salman, to discuss strategy on the issue.