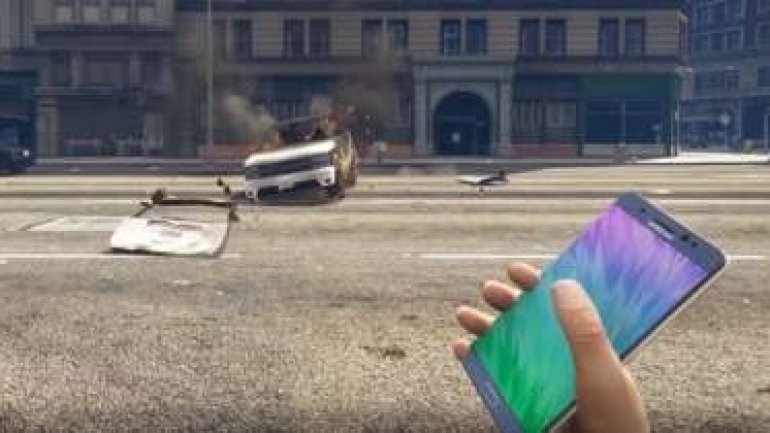 Many gamers have showcased a modification to video game Grand Theft Auto V, in which sticky bombs were switched with exploding Samsung phones.

But some have reported that their videos have been blocked on YouTube following a copyright complaint.

Samsung has not yet responded to repeated BBC requests for comment.

Critics have warned that trying to remove gamers' videos will only draw more attention to them.

The Galaxy Note 7 was recalled and discontinued in October after reports that some handsets were catching fire.

One US gamer - known as DoctorGTA - said restrictions had been put on his YouTube account as a result of Samsung's complaint.

"It's going to take three months to get the strike removed from my channel... I got my live stream taken away," he said in a video.

"If I submit a counter-notification to say 'sue me', I wonder what they will do. Will they sue me, the kid that has cancer and just makes money off YouTube playing a video game?"

"It really sucks, because I really worked hard on this channel."

Some viewers warned that Samsung was at risk of invoking the Streisand Effect - a term used to denotes increased publicity as a result of attempts to remove embarrassing online content.

It was first used in 2005 by Mike Masnick, founder of the website Techdirt, following a failed attempt by singer Barbra Streisand to sue a photographer who posted a picture of her seaside home.

The original download page for the Grand Theft Auto V modification, created by player HitmanNiko, has not been taken offline.