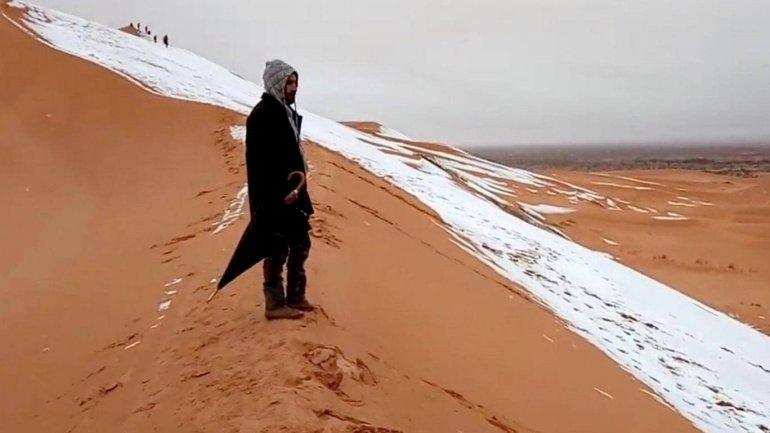 Snow has fallen in the Sahara, covering desert dunes in a layer up to 40 cm deep, wrote independent.co.uk.

Snow started falling on the Algerian town of Ain Sefra in the early hours of Sunday morning, giving children an opportunity to race each other down the slopes.

Unfortunately rising temperatures meant it began to melt around 5 o'clock.

It is the third time in nearly 40 years the town, known as "The Gateway to the Desert," has seen snowfall.

In 1979, a snowstorm lasting half an hour stopped traffic.

Two years ago, snow settled for around a day, and the town saw snowfall again last year.

Snow in the Sahara is "unusual but not unheard of," a spokeswoman for the Met office told The Independent

"It seems like the snowy pictures were taken across the higher areas in the north of the region, towards the Atlas regions, so it's not surprising that the area would see some snow if the conditions were right.

"With the setup over Europe at the moment, which has given us cold weather over the weekend, a push southwards of cold air into that region and some sort of moisture would bring that snow."

Ain Sefra, which was founded in 1881 as a French garrison town, sees average high temperatures of over 37C in summer and has seen record lows of -10.2C in winter.