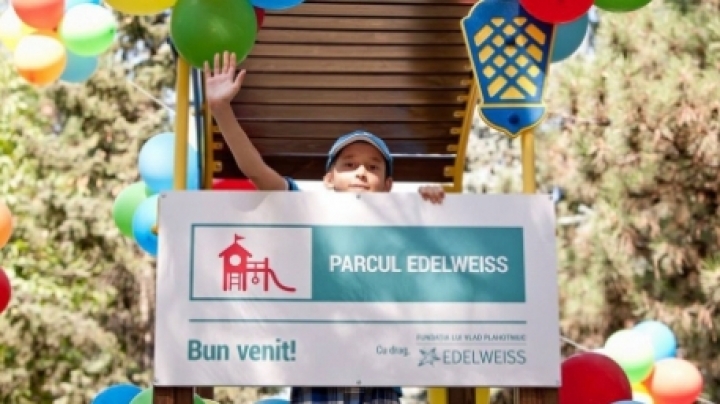 "Edelweiss Parks" Project continues bringing joy to children and parents in the country. A new playground was opened in the capital. The ceremony was attended by dozens of children with their parents, but also by the founder of "Edelweiss" project. Vlad Plahotniuc said that supporting families is one of his main priorities and he will continue such campaigns.

Joyful children voices were heard in the Rascani sector of the capital, where the new playground was arranged. Attending the event, the founder of the Foundation "Edelweiss", Vlad Plahotniuc, cut the ribbon and opened the floor together with 3-year-old Eva.

Within seconds, all children stormed the playground.

Besides fun, children reiceived gifts like crayons, books, encyclopedias from the Edelweiss Foundation.  They were really excited about the new playground and said they will come every day.

The playground covers an area of over 200 square meters and is set in a park.

Vlad Plahotniuc, founder of "Edelweiss" foundation said that this project was created to develop and protect children in our country.

"We designed this project for two reasons. The first is the lack of modern playgrounds and second, children's need to spend time on developed and secure places so that their parents do not worry. We will open more than 40 playgrounds, and this one is the tenth" , said the founder of " Edelweiss " Foundation, Vlad Plahotniuc.

The Project "Edelweiss Parks" was launched by Vlad Plahotniuc in several parts of the country.