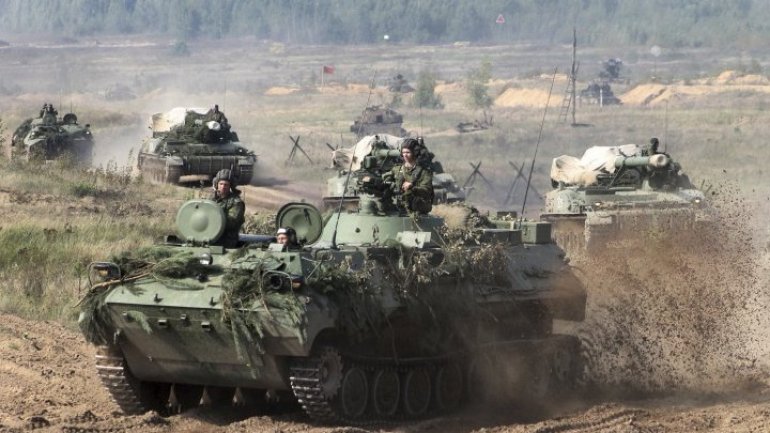 foto: Belarusian army vehicles drive preparing for war games at an undisclosed location in Belarus on Sept. 11, 2017. Russia and Belarus are holding a massive war games, Zapad 2017, that due to start on Thursday near the borders of Poland, Estonia, Latvia and L
AFLĂ imediat Știrile Publika.MD. Intră pe Telegram

The Zapad drills, Russia’s premier military exercises, have begun. The primary goal in these quadrennial war games is to prepare Russian troops for a major war – by some European estimates, as many as 100,000 could take part in the manoeuvres from Sept. 14-20 – with their "presumed opponents" being the U.S. and its allies. But no less important is the message these games seek to send to the world: the Russian military, nearly three decades after the fall of the Soviet Union, is once again a force to be feared.

Russia’s neighbors have gotten the message, and some fear the Russians may have another, more nefarious goal in mind with this year's Zapad (Russian for "West"). Weeks before the exercises began, Poland warned that they could be used as cover for a Russian invasion. The small Baltic nation of Lithuania, a U.S. ally and NATO member, announced plans to build a fence to stop Russian troops from wandering or sneaking into its territory during the drills. Lieutenant General Ben Hodges, the commander of U.S. Army forces in Europe, summed up the concerns to Reutersin July: “People are worried this is a Trojan horse.”

That analogy seems somewhat strained. The Russians, unlike the Trojans, would not have the element of surprise in trying to breach their opponents’ defenses during the Zapad drills. The U.S. and European forces have intensified their patrols of the region where the games will be held, and after some tense negotiations, Russia allowed several observers from the NATO alliance to monitor the exercises.

But that gesture of transparency has not done much to calm Western concerns. Usually held every four years along the Russian borders with NATO and the European Union, Zapad tends to include a simulated nuclear strike against a European nation. In 2009 the hypothetical target was Poland; in 2013 it was Sweden. And depending on how aggressive a signal Russia wants to send, it could choose to forgo the nuclear part of the exercises with this year's target: the fictional country of Veishnoriya, supposedly backed by the West and in coalition with two other fake nations of Lubeniya and Vesbasriya. International observers suggest that the invented countries are proxies for the Baltic States and Poland.