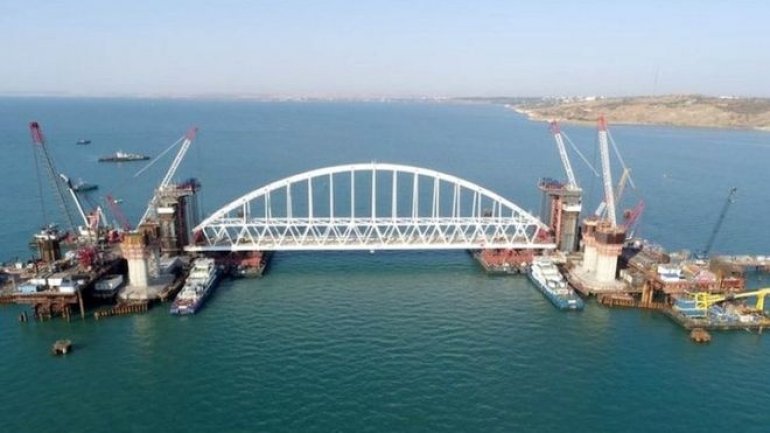 Russian engineers are installing a giant railway arch in the channel between Russia and Crimea, as a 19km (12-mile) road-rail bridge takes shape.

It is a flagship political project, as Russia claims Ukraine's Crimea peninsula - which it annexed in March 2014 - as its own territory.

It will take about a month to fix the arch, weighing 6,000 tonnes, to massive supports in the water.

The road section of the Kerch Strait bridge will also have a giant arch.

The project's official website (in Russian) - www.most.life - says the bridge should be completed by the end of next year, when the first cars will cross it. Then rail traffic will start crossing it in 2019.

The EU and US have ratcheted up sanctions on Russia since first imposing restrictions over the seizure of Crimea.

Western firms and politicians are banned from doing business with the Russian-installed Crimean government, or with Russian economic actors there.

The bridge will not impede shipping, the project website says, as it will stand 35m (115ft) above the water.

The four-lane highway is designed for a capacity of 40,000 vehicles per 24-hour period.

Russia sees the bridge as a key strategic tool for developing Crimea, more efficient than the current ferry service.