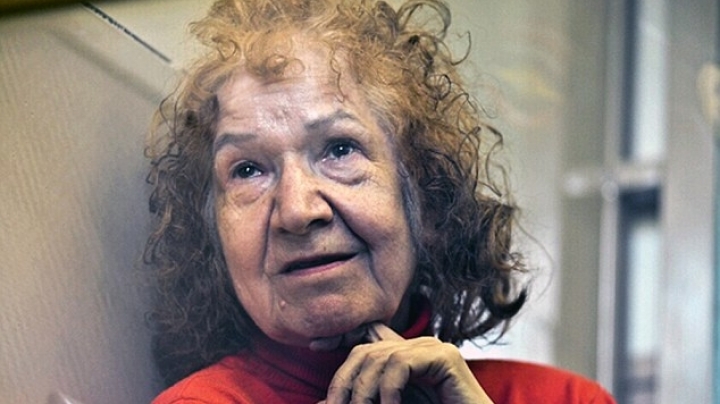 A pensioner dubbed the granny ripper after she killed her elderly friend before severing her head and boiling it in a saucepan crushed at least 50 sleeping pills into her food before slaughtering her, investigators say.

Tamara Samsonova, 68, was caught by CCTV cameras as she took the macabre pan out of a St Petersburg apartment block in Russia to throw it in a rubbish skip, reports Daily Mail.

Today, Russia's powerful Investigative Committee - equivalent of the FBI - sent her case to court, alleging she killed her friend Valentina Ulanova, 79, 'on the spot' with the massive drugs overdose.

An official statement said: 'Then, in order to conceal the committed crime, she dismembered the body of her victim and placed the parts in different places near the apartment block. She used a handsaw to slice up Mrs Ulanova, for whom she was a carer, in July last year, using plastics bags to dispose of other body parts.'

There were 'personal hostile relations' between the two women, and Samonsova had a 'conflict with her friend', the statement added.

The Investigative Committee also disclosed today that a new official diagnosis confirms that Samsonova is suffering from 'paranoid schizophrenia.'

This is likely to mean that claims she had ten or more victims will never be fully probed, even though the investigation into other crimes remains open.

The diagnosis was made in a notorious Soviet-era psychiatric prison hospital in Kazan where Samsonova was sent earlier this year.

A judge in St Petersburg will now decide on Samonsova's fate. The pensioner will be present at the hearing for which no date has been announced.

It is likely she will be sent for treatment to a psychiatric hospital, rather than face a jail sentence.

Samsonova - who once worked in one of St Petersburg's top hotels which had many foreign visitors - confessed to police that she was responsible for killing Ulanova after poisoning the elderly woman's salad.

She refused to co-operate with investigators on up to 11 more feared killings which she indicated in diary entries written in Russian, English and German.

Police do not rule out further charges but sources admit difficulties in proving other suspected murders because they cannot find human remains.

Among others, she is suspected of butchering are several lodgers, her husband, and her mother in law, who all vanished suddenly and without trace.

The Samsonova investigation remains 'active' but there are now fears that it may be impossible to find traces of her suspected victims.

Marina Krivenko, 53, who lived next door to Samsonova, said the 'Granny Ripper' was interested in Soviet serial killer Andrei Chikatilo, executed in 1994.