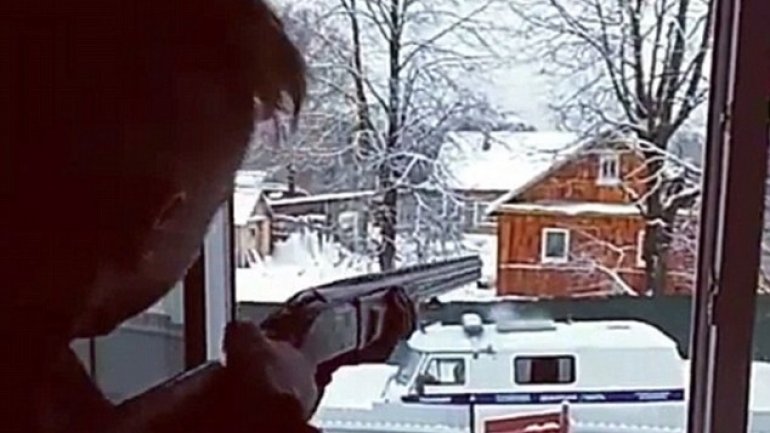 Two schoolchildren live-streamed themselves in a shootout with police before turning their guns on themselves, reports Daily Mail.

The 15-year-olds were found dead inside a house in the northwestern Russian Pskov region after the standoff.

The boy, named Denis Muravyov, had shot the mother of the girl, who was named Katya, in the leg during a row about attending a sleepover.

The chilling footage was filmed as police surrounded the house they were in.

In one horrifying sequence, Katya is seen holding a gun to Denis's head.

In his final post, on Russian social media site VK, Denis wrote: 'I loved you, but you do not notice how you destroyed my mind and life. Goodbye all, friends and family, and acquaintances. Do not worry, I will go out in style. Good luck to all in your life and please do not be afraid to live as you want or you see fit. Life is for fun - this is the best life. I love you.'

The gunfight was broadcast on live video app Periscope, and pictures of them firing at police were also posted to Instagram.

The National Guard special forces said in a statement to TASS news agency that they found 'the bodies of a girl and a young man with clear signs of suicide', stressing they did not open fire.

On the chilling Periscope live stream, Katya - who is believed to have been dating Denis for around six months - is seen stating: 'We have zero options.'

The couple are heard laughing and joking inside the house, but at one point Katya screams at the sound of a gunshot.

The schoolgirl is also heard laughing after Denis fires a rifle at a police vehicle outside.

As well as at least two rifles, each of the teenagers was seen holding a rifle, and the footage reveals boxes of ammunition on a table inside the house.

'This is a terrible tragedy. We're looking into the circumstances and the details of what happened,' Russian children's ombudswoman Anna Kuznetsova told TASS.

Denis is also seen holding a photograph of Russian President Vladimir Putin shaking hands with a man in a suit.

Pointing to the man standing next to Putin, he says he needs to be killed, but says Putin is 'OK'.

Katya then claims that this man has beaten her up repeatedly. It is not immediately clear from the video who it is.

Investigators said they were trying to find out the reason for the 'desperate step' by the teenagers.

Investigators said police were called to the house in the village of Krasniye Strugi as part of the search for a missing teenager, only for a police car to come under gunfire.

Katya said in the footage posted on Periscope that there were guns in the house because her stepfather is 'in the special forces'.

Denis is shown firing a rifle from the window of the wooden house at a police van.

The teenagers transmitted footage of their last hours in which they smoked, drank and answered classmates' messages.

They referred to conflicts with their parents and said they had been holed up in the house for three days.

Denis said that he had also shot Katya's mother in the leg, and the couple said they feared decades in jail if they surrendered.

Katya's mother had been infuriated when the teenager attended a sleepover without permission.