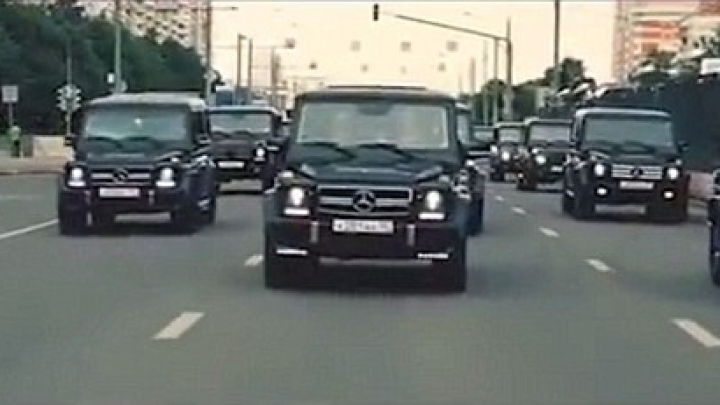 Russia's FSB security service said it would punish dozens of new agents who celebrated graduating from the agency's training academy by ostentatiously driving through Moscow in a luxury convoy allowing themselves to be photographed, reports Daily Mail.

Millions of Russians have watched footage of the incident, with many, including veteran spies, branding it a shameful display of wealth and power at a time of economic crisis.

'For four years they were taught conspiracy, corporate ethics and that one must not reveal secrets,' retired FSB Major-General Alexander Mikhailov told the Komsomolskaya Pravda tabloid. 'So pompous and arrogant. If that's how they start their careers, they won't do any good.'

The newly minted agents hired dozens of black Mercedes jeeps which they drove through the Russian capital's streets last month, blocking traffic, honking their horns, and hanging out the windows filming each other on their mobile phones.

They also organised a group photograph, which showed some of the young men clutching champagne flutes. The photograph found its way onto the internet along with video footage of the convoy.

The new agents' faces are clearly visible, handing a possible gift to rival foreign intelligence agencies, a fact that angered veteran Russian agents, some of whom said it amounted to treason.

The FSB is the main successor to the KGB, romanticised in Soviet times as the warriors of the invisible front, but feared by any who questioned authority. The FSB and the overseas intelligence organisation, the SVR, retain great influence under President Vladimir Putin, himself a former KGB officer.

The Kremlin, preparing for September parliamentary polls, was unamused by the FSB graduates' exuberance. Opinion polls show a yawning gap between rich and poor is one of Russians' top worries and there are growing signs the authorities want to curb overly showy displays of wealth which might stir tension.

The FSB, whose activities include internal and border security, counter-terrorism, and surveillance, said in a statement it had conducted an inquiry into the scandal and had decided to take tough action.

The FSB said on Thursday that the agents involved would be punished by having the conditions of their assignments changed, that some of the Academy's trainers had been demoted and others would be fired.