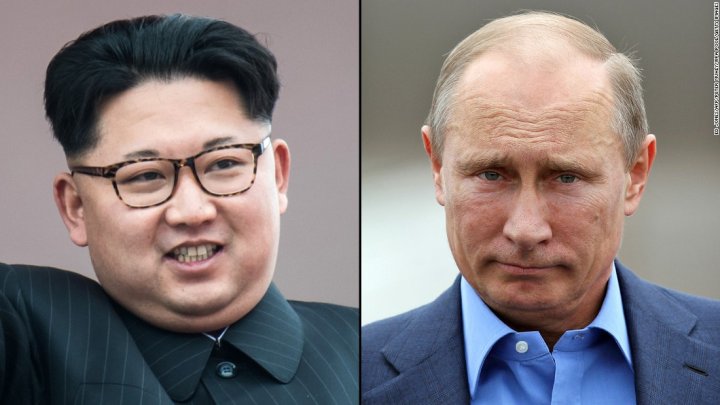 The meeting between the Cold War allies comes at a delicate moment in the nuclear negotiations between North Korea and the United States, which have stalled since the last round of talks in Hanoi fell apart earlier this year, writes CNN.

The Kremlin did not provide any further details about the meeting between Kim and Putin, who are not believed to have ever met each other.
The announcement came just hours after North Korea's foreign ministry called for US Secretary of State Mike Pompeo to be replaced in any further negotiations between the two countries.
In a statement released by the state-run Korean Central News Agency earlier Thursday, foreign ministry official Kwon Jong Gun said Pompeo had been "letting loose reckless remarks and sophism of all kinds against us every day."
Kwon said Kim had taken a "principled stand" on the talks with the US in a recent speech to the North Korea's rubberstamp parliament.
"Everyone has a clear interpretation of his speech, which says that the US should change its way of calculation and come up with responsive measures before the end of this year," Kwon said.
Kwon complained that Pompeo had characterized Kim's speech as being about finishing "working level negotiation between (North Korea) and the US by the end of the year," an interpretation he said was "talking nonsense."
North Korea has been pushing for more sanctions relief in exchange for denuclearization, while the US has demanded greater evidence that the country is prepared to reduce its nuclear arsenal. The disagreement is believed to be the primary reason the Hanoi talks came to an abrupt end.
Kwon appeared to blame Pompeo for the collapse of those talks, saying that the summit "gives us a lesson that whenever Pompeo pokes his nose in, the talks go wrong without any results."
"Therefore, even in the case of possible resumption of the dialogue with the US, I wish our dialogue counterpart would be not Pompeo but other person who is more careful and mature in communicating with us."
Pyongyang's diatribe against Pompeo came on the heels of a state media report claiming that Kim Jong Un had inspected and directed a "new tactical guided weapons firing test."
The report, published Thursday morning local time (Wednesday evening ET) by KCNA, did not state exactly what kind of weapon was tested, nor its potential range.
However, the description provided by KCNA suggests that it does not represent a return to missile testing for the regime -- a tactical weapon is designed to be used on the battlefield, and is typically not a long-range armament.
No missile launch was detected by US Northern Command and Strategic Command, according to US Department of Defense officials.
Kim praised the weapon's capabilities, KCNA reported.
"The development and completion of this weapons system will be a great historic event in strengthening the combat capability of the People's Army," he reportedly said.
Pyongyang last conducted a "tactical" weapons test in November 2018. A South Korean government source with military knowledge told CNN that weapon was likely a piece of long-range artillery "likely to be a multiple rocket launcher." At the time, South Korean Unification Ministry deputy spokeswoman Lee Eu-gene downplayed the significance of the 2018 event, saying Kim had been continuing his inspections in the military sector "intermittently."
AFLĂ imediat Știrile Publika.MD. Intră pe Telegram