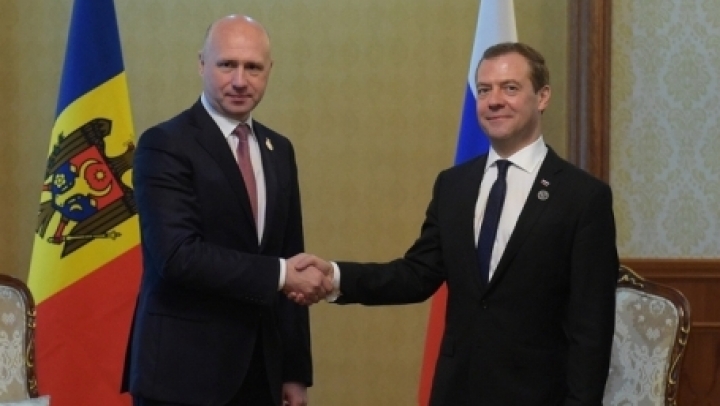 Premier Pavel Filip has met with his Russian counterpart Dmitri Medvedev in Bishkek. The prime-ministers have discussed about the necessity to continue the political dialogue and to relaunch the economic relations between the two countries.

"We hope these efforts will positively impact the cooperation on all the fields and, first of all, will contribute to overcoming the barriers in the traditional commercial-economic relations to return to the ascending trend in trading," Pavel Filip has said.

The prime-minister has referred to the coming visit of Russian deputy premier Dmitri Rogozin to Chișinău, planned for July 5-6, 2016, during which the sides will agree on roadmap to remove the restrictions from the export of Moldovan goods to the Russian market.

In this regard, the Moldovan authorities in charge will closer cooperate with the Russian consumer protecting agencies in order to observe quality standards.

"I wish you success during this difficult economic period for Moldova. The Russian Federation is interested in your success and I am ready to discuss about the current situation in our relations and its perspectives,” Dmitri Medvedev said.

The two Cabinet chiefs have also tackled the intergovernmental cooperation in culture, migration and the settlement of the Transnistrian conflict.

"Settling the Transnistrian conflict is a priority for the Chişinău Government, that is why we appreciate the role of the international mediators, including the Russian Federation, in relaunching the 5+2 format talks,” said Pavel Filip.

Pavel Filip has said the Free Trade Agreement within the CIS must be fully implemented and there is no legal contradiction with the trade regime Moldova has with the EU.

The Moldovan official has said the implementation of Moldova’s Free Trade Agreement with the EU creates opportunities for foreign investors, including from Russia, to enjoy the lack of customs taxes to export goods to the EU.

Premier Filip has mentioned there are favorable conditions for the Transnistrian companies to trade by enjoying the preferences offered by the Moldovan law.