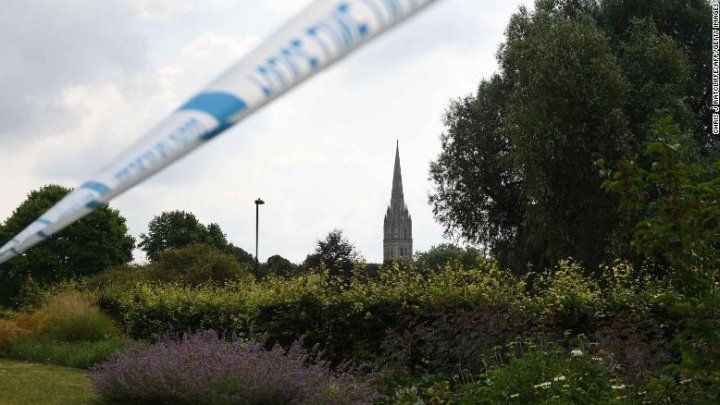 A Russian flag has been spotted on Salisbury Cathedral in England, in an apparent stunt making light of the poisoning of former KGB agent Sergei Skripal in the city last year.

The flag was noticed scaffolding surrounding part of the cathedral on Sunday morning before being taken down by workers, but several residents and the local member of parliament took to social media to criticize the prank.
Former Russian spy Skripal and his daughter Yulia became seriously ill in the city after being poisoned in a Novichok attack last March, and 44-year-old woman Dawn Sturgess died in Julyafter being exposed to the perfume bottle in which the poison was carried.
Months later, Salisbury Cathedral came to international attention when the two Russian agents accused of carrying out the attack claimed they were merely in the UK as tourists, hoping to admire its 123-meter spire, writes CNN.
"Thankfully it has been removed now -- what a stupid stunt -- mocking the serious events sadly experienced in Salisbury last year," the city's MP wrote on Twitter.
"How dare some stupid fool disrespect our city. After everything this city has got through it does not need this," a local resident added.
The prank appears to relate to an interview Alexander Petrov and Ruslan Boshirov, the two men accused by Britain of carrying out the attack, which they deny, gave to Kremlin-backed news network RT in September.
Asked to explain why the men made a visit to the city that lasted less than two hours, Boshirov said: "It's a touristic city. There's a famous cathedral there, the Salisbury cathedral. It's famous not just in all of Europe, it's famous all over the world. It's famous for its 123-meter spire, it's famous for its clock, the first clock made in the world that still runs."
"The cathedral is very beautiful, there are lots of tourists there," he added later.
Last month, Igroland -- a Russian toy company -- released a board game called "Our Guys in Salisbury," which begins Moscow and ends in Salisbury with figures in Hazmat suits.
AFLĂ imediat Știrile Publika.MD. Intră pe Telegram