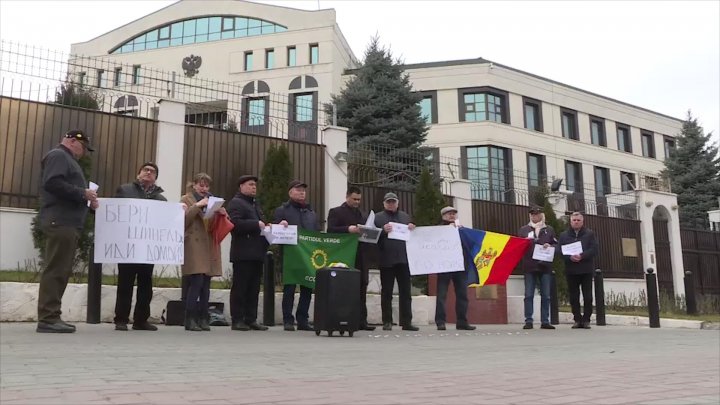 Dozens of members of the Ecologist Green Party have allied in front of the Russian Embassy in Chisinau. They demand the withdrawal of Russian troops on the left bank of the Dniester and the evacuation of the ammunition depot from Cobasna.

The participants also paid tribute to those who fell in the Dniester war.

"We do not give up, we do not forget, eternal memory of the heroes of the nation," said Vitalie Marinuță, the party president.

"We commemorate the people who have been fighting for the truth. Manipulators should know one thing: you can't go far with lies", said the president of the Party National Council, Andrei Dumbrăveanu.

"We don't need to believe Russia because it is aggression-and-lie-based state. We, the Moldovan citizens, must fight and demand that these ammunition be evacuated," stressed Anatolie Prohnițchi, first vice-president of the party.

Representatives of the Russian Embassy have not yet commented on the protest, organized by the Ecologist Green Party.

The Transnistria War was an armed conflict that broke out in November 1990 in Dubăsari between pro-Transnistria forces, including the Transnistrian Republican Guard, militia and Cossack units and pro-Moldovan forces, including Moldovan troops and police. Fighting intensified on 1 March 1992 and, alternating with ad hoc ceasefires, lasted throughout the spring and early summer of 1992 until a ceasefire was declared on 21 July 1992, which has held.