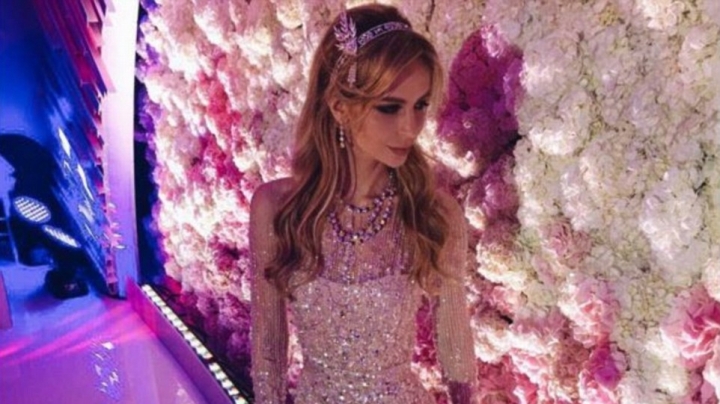 The son of an Armenian billionaire and his bride have held what may be one of the most extravagant weddings ever in Moscow, costing more than $2 million, informs Daily Mail.

The nuptials in question were that of 23-year-old Sargis Karapetyan and his Georgian bride, 25-year-old Salome Kintsurashvili, and were beyond lavish.

Attended by the President of Armenia, Serzh Sargisyanu, the Moscow-based pair's celebration was held at the famous Safisa, where billionaire's son Said Gutseriev, 28, married 20-year-old student Khadija Uzhakhovs in March.

The wedding which saw J.Lo and Enrique Iglesias perform made headlines around the world, but this latest ceremony managed to put the extravagance of the Gutseriev nuptials in the shade.

Sargis Karapetyan is the son of Samvel Karapetyan, who sits at number 28 on the Forbes Russian Rich List.

With a net worth of around $4 billion, his son's wedding was always going to be extravagant.

How extravagant? Firstly, Maroon 5 were the wedding band. It's been estimated that they were paid around $500,000-800,000 to play the gig, and the bride certainly made the most of the expensive by joining the lead singer Adam Levine on stage to sing along.

Personalities from Russian television also attended including Andrey Malakhov, while presenter Tanya Gevorkyan looked stunning in a green strapless gown by Oscar de la Renta as she posed in the fairytale surroundings.

While the groom works as Vice President of his father's company, Salome is the co-owner of the online vintage fashion store Buy By Me, but she eschewed a pre-loved item when it came to choosing her wedding dress.

The bride opted for three different gowns, the first of which was a glittering Elle Saab gown with long sleeves and a train.

Although the cost of the dress has not been revealed, the starting price of a couture wedding dress by the Lebanese designer is $35,000.

She changed into a lace gown by Alessandra Rich and also a more traditional wedding gown.

Her accessories included the Tiffany Savoy headpiece, which was worn by Carey Mulligan in the film The Great Gatsby.

The headpiece of diamonds and freshwater cultured pearls in platinum with a detachable spray of feathers brooch costs in excess of $200,000 (£13,800).

Folk dancers from Armenia and Georgia performed to reflect both the bride and groom's heritage.

And whilst the dresses were stunning, it was the venue and decorations that made the wedding look like a real fairy tale affair.

As guests entered the reception, they walked through what looked like an incredible forest, complete with fake trees and real flowers.

One friend, who posted a photo to Instagram, said it felt like she was in Alice in Wonderland.

In the main reception room, where the 500 guests were seated, a huge chandelier and fairy lights made it feel magical.

There were also thousands more flowers, including a flower wall, which the new Mrs Karapetyan posed in front of for photos.

The nine-tier cake was covered in flowers and at least two metres tall, standing on a large table in the centre of the room.

Standing six metres high, the confection was created by Iyad Abusharaf, a world renowned chef who once worked for the Prince of Kuwait.

Guests on social media commented that they had never seen a wedding cake so tall that it was getting in the way of the chandeliers before.

To complete it all, the room was bathed in purple light, giving everything a incredible storybook glow.

Many of the guests shared incredible photos and video of the night on social media under the hashtag #sarkissalome, causing widespread interest in the nuptials.