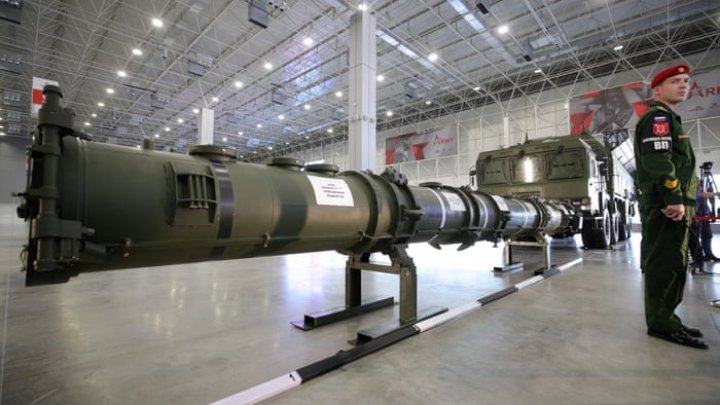 Vladimir Putin has said that Russia will develop new weapons and aim them at western “centres of decision-making” if the west deploys new short and medium-range missiles in Europe, reports The Guardian.

The threat, which appears to describe Washington and other western capitals, came after the United States and then Russia suspended compliance with the 1987 Intermediate-Range Nuclear Forces treaty.

In a speech to senior Russian officials in Moscow, Putin said the possible deployment of missiles that could reach Moscow in 10 minutes was “dangerous for Russia,” and that Moscow would be forced to review “symmetrical and asymmetrical actions”.

“Russia will be forced to create and deploy types of weapons, which can be used not just against those territories, from which the direct threat will come, but also against those, where the centres of decision-making for using these missile systems will come,” the Russian president said.

The treaty, concluded by Ronald Reagan and Mikhail Gorbachev, banned the development and deployment of land-based missiles with a range of 500-5,500km and was widely credited with banishing nuclear missiles from Europe. The US, led by the national security adviser, John Bolton, suspended the treaty this month amid claims that Moscow had secretly developed a cruise missile that violated the agreement. Russia denies this.

During the speech, Putin reaffirmed Russia’s stance that it would not deploy short or intermediate-range missiles in western Russia unless similar weapons were first deployed in Europe.

While Russia is believed to already target Washington and other western cities with traditional intercontinental ballistic missiles, Putin’s speech revealed details about ongoing Russian weapons projects, including a hypersonic missile named Tsirkon that could travel up to 1,000km and would be able to strike land targets. The Russian defence secretary, Sergei Shoigu, this month appeared to say it was being modified to be launched from land as well.

The speech, seen as Russia’s version of the State of the Nation address, was largely focused on the economy. Putin, whose popularity ratings are at a five-year low, promised increased public spending, lower taxes for families and better living conditions for Russians.