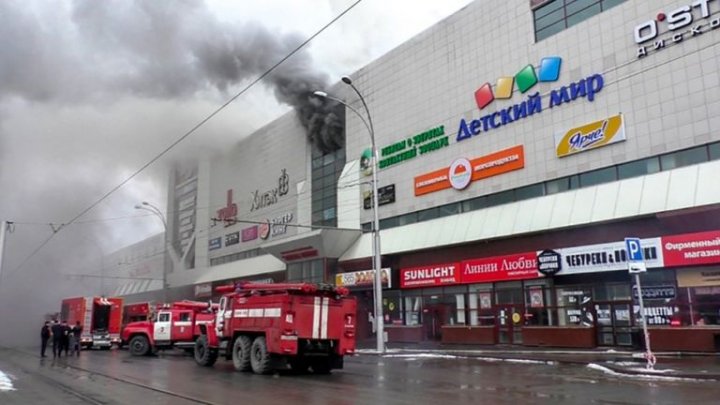 At least 53 people have died in a fire that tore through a shopping and entertainment complex in the Siberian coal-mining city of Kemerovo.

As many as 41 children may be among the victims, officials say, and more than 10 are listed as missing.

The blaze started on an upper floor of the Winter Cherry complex while many of the victims were at the cinema.

Video posted on social media showed people jumping from windows to escape the flames on Sunday.

"According to preliminary information, the roof collapsed in two cinemas," Russia's Investigative Committee said in a statement.

The cause of the fire is not yet known and authorities have launched an investigation.

Some 660 emergency personnel were deployed in the rescue effort. Firefighters tackled the blaze for more than 17 hours.

As well as a multiplex cinema, the shopping centre, which opened in 2013, includes restaurants, a sauna, a bowling alley and a petting zoo.

The fire is believed to have started at around 17:00 (10:00 GMT) on Sunday in a part of the building that contains the entertainment complex, local media report.

Yevgeny Dedyukhin, deputy head of the Kemerovo region emergency department, said the area of the fire was about 1,500 sq m.

"The shopping centre is a very complex construction," he said. "There are a lot of combustible materials."

Four people have been detained for questioning, including the head of the company that manages the shopping centre, according to the Investigative Committee. The owner of the Winter Cherry complex is thought to be among those detained.