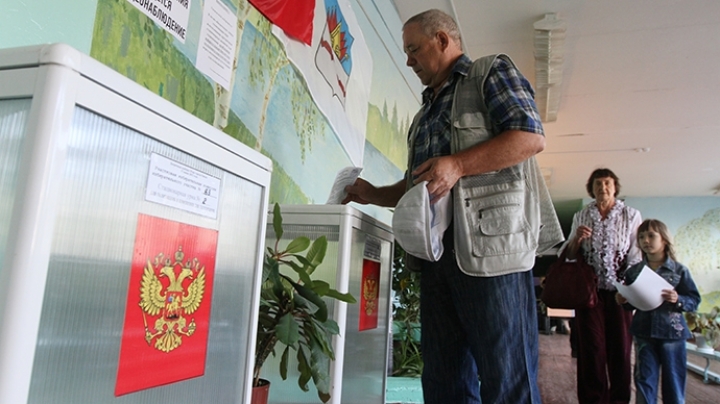 Most Russians will vote on Sunday but in the remotest regions ballots were cast early, in a country spanning 11 time zones. Evidence of vote-rigging sparked mass protests after the 2011 election.

For the first time, Russia is holding elections to its parliament in Crimea, which it annexed from Ukraine in 2014 in a move condemned internationally.

Voters will choose 450 MPs in the State Duma (lower house), for the next five years. The outgoing Duma had just a handful of MPs opposed to Mr Putin.

Despite Russia's economic malaise and tensions with the West over the conflicts in Ukraine and Syria, some observers called the election campaign the dullest in recent memory. Widespread voter apathy suggests that turnout could be low.

The first exit polls are expected on Sunday evening.

Some critics of President Putin got a rare chance to put their case to a mass audience on TV but significant opposition figures like Alexei Navalny were barred from campaigning.

Tensions are running high in Ukraine, where the government is furious about Russia's plans to hold elections in Crimea, annexed after an unrecognised referendum on self-determination.

A Ukrainian foreign ministry spokeswoman, Mariana Betsa, said voting in the Russian election could not take place in her country, even at Russian diplomatic and consular buildings in her country.

However, her Russian counterpart, Maria Zakharova, insisted that polling stations would be "organised in Ukraine at the Russian embassy and in our consulates-general".

She said observers from the OSCE international security organisation would monitor the voting in Ukraine. About 80,000 Russian voters live in Ukraine, Russian electoral officials say.

Ukraine's parliament, the Rada, has urged countries not to send observers to the Russian elections in Crimea and not to recognise the results there.

Any such visits will be treated as criminal violations of Ukraine's borders, the parliament warned.

President Putin's spokesman Dmitry Peskov countered that Russia did "not plan to discuss the electoral process on its territory with any other country".