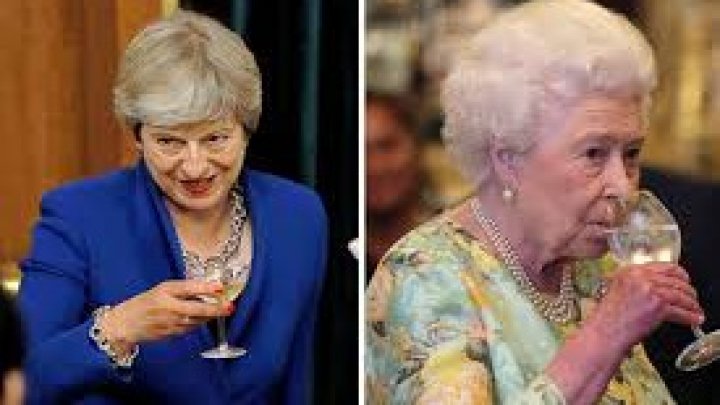 Outlandish claims by Russia suggest the Queen is a heavy drinker who enjoys up to five beverages a day.

As the country ramps up its fake news offensive against Britain, a Russian senator claimed the monarch was a 'frequent brandy drinker'.

Aleksey Pushkov, an ally of Vladimir Putin, said Her Majesty approaches drinking like a 'ceremony'.

'Before dinner she drinks a cocktail made from gin and another based on wine, with ice and lemon.

'After the meal, she has a glass of wine with a bar of chocolate. She also drinks dry Martini.

'At the end of the day, she likes to drink cool Champagne.'

The senator even drew on the expertise of a wine buff to claim Theresa May was a frequent brandy drinker.

Wine 'expert' Elina Denisover said the way the Prime Minister cupped her glass - which warms the brandy - suggests she enjoys a Cognac.

'You will get drunk quicker and it is just not pleasant,' Deniover added.

'It means that May got used to another kind of glass — for Cognac.'

It comes as Foreign Office diplomats state smears by Russia were aimed at discrediting Britain's claim that Russia tried to kill former spy Sergei Skripal, 66, and his daughter Yulia, 33.

Senior Tory MP Bernard Jenkin branded the comments 'absurd' and that they belittled the Russian president's attempts to distance himself from the 'outrageous' nerve agent attack.

He told Sun Online: 'Everybody knows that Her Majesty is a model of propriety and integrity and that Theresa May is admired for her sincerity and self-discipline.'