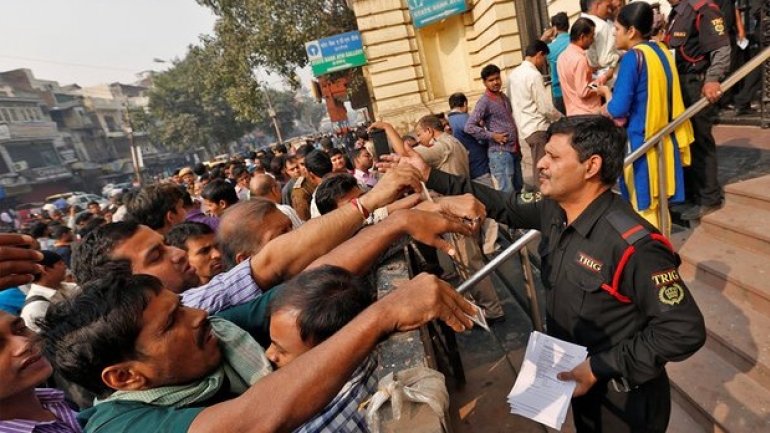 Angry queues of panicked Indians wound around bank buildings in Mumbai, the financial capital, on Thursday morning, two days after the prime minister, Narendra Modi, announced that 500- and 1,000-rupee notes, worth around £6 and £12, would be taken out of circulation, reports The Guardian.

In a televised announcement on Tuesday night, Modi had urged Indians not to rush to banks, as they would have until the end of 2016 to deposit cash in their accounts. But with the high-value notes withdrawn from Wednesday in an effort to combat corruption, black-market trade and tax evasion, many were left without cash for day-to-day expenses.

Banks were closed on Wednesday, and reopened on Thursday morning with a cap on cash withdrawals. ATMs remained closed, so currency was only available from the banks. Newspapers around the country reported long queues at branches, as people scrambled to exchange their high-value banknotes for 100-rupee bills.

At the Churchgate branch of the Bank of India, dozens of people queued in the midday heat, filling out deposit forms as a security guard barked instructions. “Life is completely paralyzed,” said Maganbhai Solanki, who had been waiting in line for four hours.

Shops, train stations, and taxis stopped accepting 500- and 1,000-rupee notes on Wednesday, interrupting normal trade. Even hospitals, which are exempt from the immediate demonetization, have reportedly turned down payments in high-value banknotes.

Some complained that Modi’s surprise announcement had completely disrupted normal life. “Nobody is willing to give you change,” said Solanki. “They should have planned this properly instead of springing it upon us.”

In rural areas especially, where around two-thirds of India’s 1.25 billion population lives and access to banks is difficult, Modi’s announcement caused chaos.

Others argued the post-Diwali season, during which people had received cash bonuses, was ideal timing for the announcement.