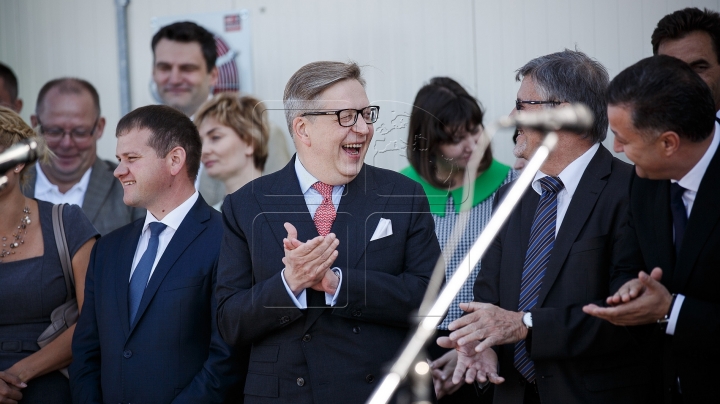 The western localities from Moldova have been connected to running water. They are Nisporeni, Vărzăreşti and Grozeşti. A water pipe of over 100 km has been built to supply over 15,000 people.

The project cost over EUR14 million, as Vlad Plahotniuc’s Edelweiss Foundation has provided a significant contribution.

The water comes from the Prut river and is processed at a modern plant. The EU has also contributed to the project.

"This project is very dear to me, because I have been born in these places. We have done our best to make this project be a success. Together, we have built 101.8 km of water pipe grid," said Regional Development and Constructions minister Vasile Bîtcă.

"We must find solutions and resources to bring the water from the Prut and Nistru rivers to Moldova’s interior. Certainly this project is incentivizing for other localities," said Environment minister Valeriu Munteanu.

The people from the localities say they have been looking forward to receiving the running water for years.

The people from the village of Grozeşti were the luckiest. They did have to personally contribute with 5,000 lei, as half of the amount had been provided by Vlad Plahotniuc’s EDELWEISS foundation.

"We applied to the EDELWEISS foundation and they offered us half of the amount every villager had had to pay. It’s 1,500,000 lei,” said Grozeşti mayor Silvia Crîşmaru.

The Gortolomei family are among the beneficiaries of the support granted by Vlad Plahotniuc’s EDELWEISS foundation.

"Sure thing we’re very glad. We have been waiting for long. It had been very difficult with the water. Now it’s very good. We have a bath, thanks to our fellow villager Mr. Plahotniuc. He has helped us, contributed to very citizen with 2,500 lei," Boris Gortolomei said.

Gortolomei’s household has had running water for a month.
"It was hard without water. It was hard to cook, to do the dishes. Now we have water, a bath, it’s much better," Nelea Gortolomei said.