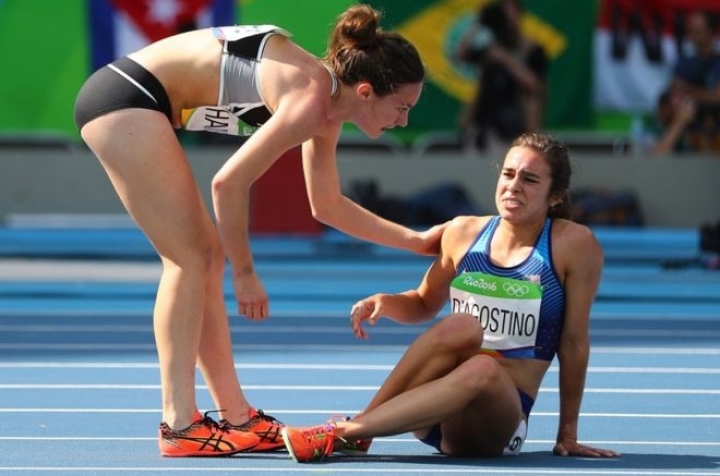 An American runner has been praised as a true Olympian after stopping mid-race to help a fallen rival on to her feet, BBC reports.

Abbey D'Agostino helped New Zealand's Nikki Hamblin who was lying dazed on the track after the two entangled and fell in the 5,000m heats in Rio.

"Get up. We have to finish this," D'Agostino told her.

It was then Hamblin's turn to help D'Agostino, hanging back to encourage the injured American, who hobbled over the line in last place.

They embraced before D'Agostino left in a wheelchair with a hurt ankle.

Neither initially qualified for the final but they earned much praise for their spirit.

The incident began about 3km (1.9 miles) into the 5km race, when D'Agostino and Hamblin collided and they both went down.

Hamblin fell heavily and D'Agostino was first to get to her feet, but Hamblin was just lying there, appearing to be in tears.
Instead of continuing the race in an attempt to catch up, the American put her hands under the New Zealander's shoulders to help her up, telling her not to give up.

The two runners were reinstated as finalists by the organisers, if they are fit enough to race in Friday night's final.