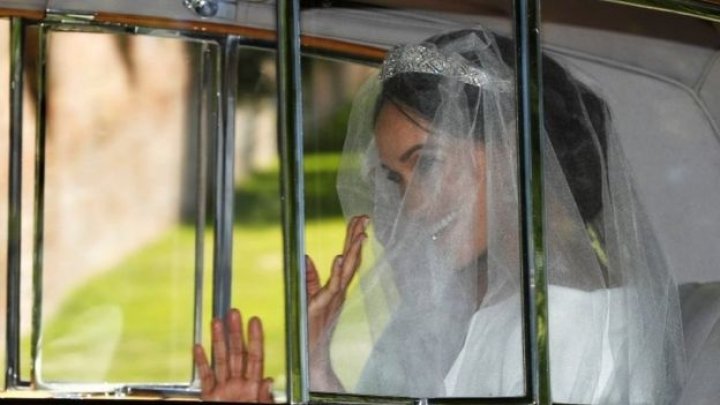 foto: Ms Markle is on her way to St George's Chapel, where members of the Royal Family have taken their seats.
AFLĂ imediat Știrile Publika.MD. Intră pe Telegram

Prince Harry has arrived at Windsor Castle, with his best man, the Duke of Cambridge, ahead of his marriage to Meghan Markle.

Meghan Markle has left her overnight hotel to travel to Windsor Castle, where she will marry Prince Harry, writes BBC.

Among the 600 guests who have already arrived at St George's Chapel are Oprah Winfrey, George and Amal Clooney, David and Victoria Beckham and Elton John.

The ceremony will begin at noon in St George's Chapel, before the newly-married couple travel through the town.

Prince Harry has been made the Duke of Sussex by the Queen, with Ms Markle becoming the Duchess of Sussex.

The prince, who is sixth in line to the throne, also received the titles Earl of Dumbarton and Baron Kilkeel.

Thousands of well-wishers are arriving in Windsor, while hundreds more camped out overnight to secure the best viewing spot.

Prince Charles will walk Ms Markle down the aisle, after her father, Thomas, was unable to attend for health reasons.

In her vows, Ms Markle will not promise to "obey" her husband and Prince Harry has chosen to have a wedding ring.

Prince Harry's ring will be a platinum band with a textured finish and Ms Markle's has been made from a piece of Welsh gold, Kensington Palace said.

Prince Harry's uncle, Earl Spencer, the Duchess of York, Sarah Ferguson, and the Duchess of Cambridge's sister Pippa Middleton, have also arrived for the service.

Politicians, including Prime Minister Theresa May, were not invited, as the wedding is not a state event.

But the former Prime Minister, Sir John Major, is among the invited guests.

About 1,200 members of the public - many who are recognised for their charity work - have been invited into the grounds of Windsor Castle for the wedding.