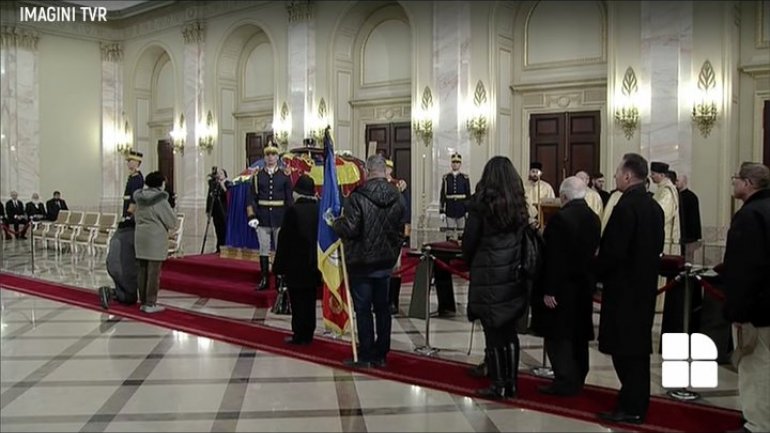 King Michael's coffin is at the Royal Palace in Bucharest. The inanimate body of the Majesty was taken last night with a funeral car. In front of the Palace, thousands gathered to greet the King on the last road with applause, shouting, "Monarchy saves Romania." (Monarhia salvează România)

PUBLIKA.MD reminds that King Michael I returned home from Switzerland, where he passed away, by a military aircraft accompanied by Defense Ministry. In the aircraft, there were also some royal family members all along to Bucharest.

People who wish to lay flowers or visit the King will be able to come to the Royal Palace Hall of the Throne:

Those present at the Royal Palace to pay tribute to King Michael I are kindly requested to observe the following rules:

They must be dressed in a proper suit with dark colors.

Not to carry bags or bulky luggage of any kind.

Do not come with children under the age of seven, or with baby carriages.

Do not use cameras, mobile phones or other electronic tools. Shooting and filming are forbidden, out of respect for the solemnity of the occasion.

Have an ID document with them.

No one will be able to deposit the flowers personally, on the bier. Flowers will be set in the garden in front of the Royal Palace or on the sidewalk in front of the palace grille. His Majesty's House staff will be on-site to guide the attending audience.

People who come to the cathedral are asked not to bring letters, illustrations, stamps, documents or photographs. All this can be sent by mail to Elisabeth Palace.

In the Royal Palace, smoking and talking on the mobile phone are strictly forbidden.

To cooperate with the specialized staff of the Ministry of Internal Affairs during the security checks carried out in the courtyard and inside the Royal Palace.

Running in the perimeter is strictly forbidden.

Obey the program of activities and the travel route set by the organizers and the instructions of the specialized staff of the Internal Affairs Ministry.

During the access to the Royal Palace there will be a first aid station.

On Saturday, December 16, 2017, at 10.25, a brief religious service will be held at the Royal Palace Hall of the Throne. The press will not have access to the Throne Hall during the ceremony.

At 11.00, the coffin of King Michael's inanimate body will be placed on a bier in the Royal Palace Square. There will be a short religious and military ceremony. Public access to the Palace Square is free, in areas specially arranged for participants. Press access is free.

At 11.10, the coffin will be on a cannon. A funeral cortege will be formed, with the Royal Family, Romanian soldiers, representatives of the Romanian Orthodox Church. The procession will be done on foot, and the gun carriage will be fired, as a tribute, by an operational military vehicle.

From 11.30 to 12.45, the funeral corps will walk on the Royal Palace Square - Victory Road - Splaiul Independenţei - Unirii Square - Entrance to the Metropolitan Hill.

From 12.50 to 14.00, the funeral service will take place at the Patriarchal Cathedral. The public and the press will not have access to the cathedral.

At 14.40, the coffin with the dead body of His Majesty will be transported by the Royal Train, from Bucharest to Curtea de Arges. They will travel to the Royal Crown Custody and the members of the Royal Family of Romania. The presence of the press and of the public will be allowed at Baneasa Royal Station.

The Royal Train will travel at low speeds in the following localities: Chitila (14.51) - Titu (15.41) - Piteşti (16.46). All those who wish to pay tribute to King Mihai I are waiting in their city train station.

At 17:50, the burial service of King Michael I will take place in the Curtea de Arges Monastery Cathedral. At 18.20, the coffin will be carried in a procession on foot to the New Archbishopric and Royal Cathedral.

At 18.40 there will be a religious burial ceremony in the New Archbishopric and Royal Cathedral.

Presence of the press will not be allowed in the two precincts, neither before nor during the two funeral ceremonies. The new Cathedral can not be visited within the first 7 days after the funeral.

Condolence books are open at Peles Castle, Royal Palace (Victory Road) and Elisabeth Palace. They are available to the public for 40 days from the date of death.

At the same time, Moldovan people wishing to send messages of condolences to the Royal Family are expected at the Embassy of Romania in Chisinau.

Condolence messages can be submitted online at http://www.familiaregala.ro/mesaje.

The funeral program will be broadcast live on PUBLIKA.MD