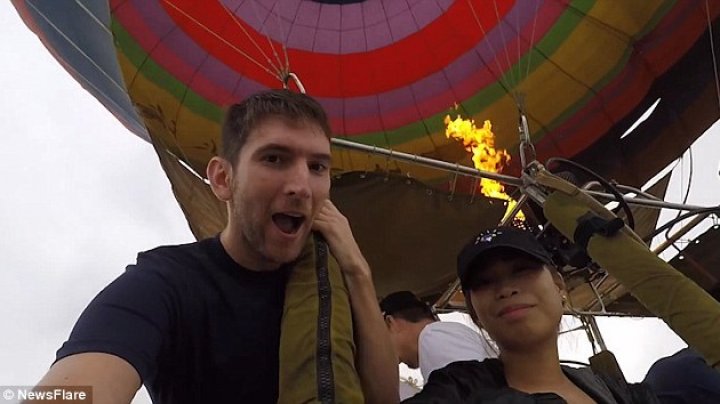 foto: The couple are seen posing for pictures as they climb ever higher above the Laos countryside /Newsflare
AFLĂ imediat Știrile Publika.MD. Intră pe Telegram

This is the moment a couple enjoying a dream hot air balloon ride in south-east Asia had a fright as they were hit by a drone.

The two tourists were enjoying a once-in-a-lifetime trip on the balloon in Vang Vieng, Laos, with a group of other excited visitors.

But the romantic setting had a rude interruption when a drone, being operated by another passenger, appeared in the sky, crashed into the woman's hand and face and cut her skin.

Her boyfriend captured the footage of the balloon trip and the drone accident in July last year.

The footage begins with the man holding the camera as they prepare to begin what they hoped would be an unforgettable balloon trip.

As they start to rise from the ground the man says: 'I've always wanted to do this', while his girlfriend says: 'I never thought I would do this.'

The couple are seen posing for pictures as they climb ever higher above the Laos countryside.

But the dream voyage is spoiled somewhat as the spinning white drone appears in the sky, floating at first before jerking suddenly, striking the woman and slamming into the balloon's basket.

Luckily the woman did not seem too badly hurt as the drone was dislodged from the balloon, although she wiped her hand on a tissue when she returned to land.