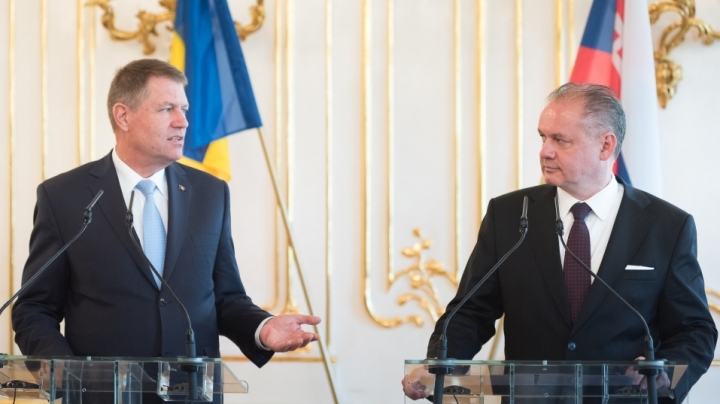 Slovakia’s President Andrej Kiska praised the anti-corruption fight in Romania during his visit to Romania, where he had meetings with President Klaus Iohannis and Prime Minister Dacian Ciolos on Monday, October 10.

“Romania shows us that economic growth can be linked with anti-corruption fight,” he said during a joint press conference with President Iohannis.

When asked by a Slovak journalist what kind of advice he has for the authorities in Bratislava in the anti-corruption fight, Romanian president Klaus Iohannis said that “we are on the right track, but we still have a lot to do.”

Iohannis said that the Eastern Partnership needs a new strategic approach, and needs to be injected “with a new vision”. He also referred to the support that should be granted to the Republic of Moldova so that the country can advance faster.

The Eastern Partnership is an initiative of the European Union governing its relationship with the post-Soviet states of Armenia, Azerbaijan, Belarus, Georgia, Moldova, and Ukraine. It’s intended to provide a place for discussions of trade, economic strategy, travel agreements, and other issues between the EU and these countries, Romania Insider writes.