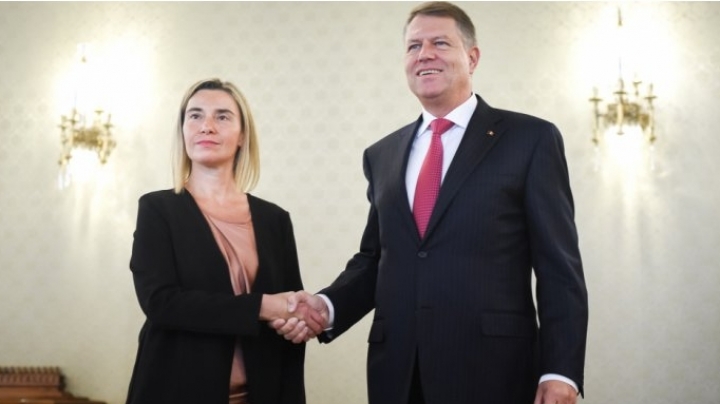 Romania and EU will not interfere with the elections due to be held in Moldova, ass this would be incorrect. Romanian President Klaus Iohannis today made statements to this effect at a meeting with High Representative of the European Union for Foreign Affairs and Security Policy Federica Mogherini, Moldpres informs.

According to the AGERPRES Agency, the two officials discussed the situation in Moldova at the meeting. In this context, the Romanian president said that “the elections represent a special chapter and here we agreed that it would be incorrect to interfere with this process. So, we and the European Union will keep an eye on what is happening, without, yet, getting involved for one candidate or another. This is inadmissible and the Moldovans will have to decide whom they will elect, without us having an interference with the electoral campaign there or getting involved in one way or another,” President Iohannis said.

The Romanian president also said he had found much openness at Federica Mogherini as regards the way on which Moldova embarked to join the European Union.

“It was well-understood that Romania has not only a special interest, but also a legitimate interest in a good march of things in Moldova and we agreed to correlate the approaches concerning Moldova as good as possible. These approaches, obviously, do not go to interference, but have the cleanest and sincerest meaning of support for Moldova on its European democratic way,” Iohannis added.