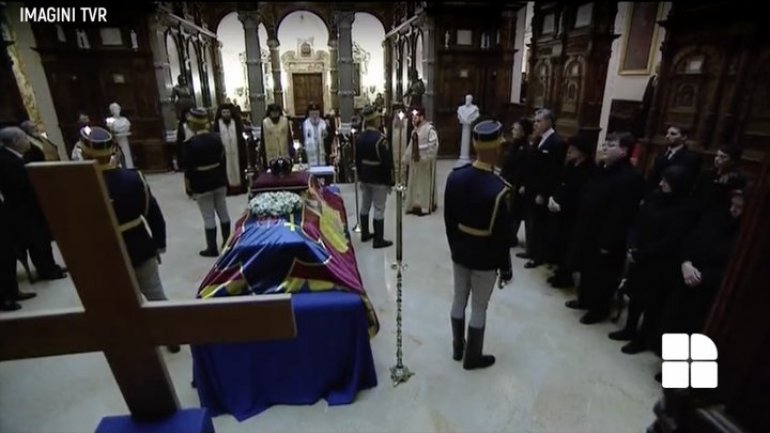 President of Romania, Klaus Iohannis, laid a wreath and held a moment of silence at the funeral of King Michael I which was also attended by leaders of the two chambers of Parliament, the Prime Minister and members of the Romanian government.

Andrian Candu, Moldova's Parliament Spokesman paid the last tribute to King Michael at Peles Castle. The official also laid a wreath and signed in the book of condolences.

The External Minister Andrei Galbur on behalf of the government and a delegation led by Iurie Leanca from the Parliament were also present at the funeral.

The king's coffin will be transported to the Throne Hall of the Royal Palace in Bucharest at 18.00, where it will remain until Saturday. The monarch's inanimate body arrived this morning in Romania. He was transported from Switzerland, where he passed away with a military aircraft accompanied by Defense Ministry.

The monk's coffin was later taken to a car and was transported to the Peles Castle, the residence of the Romanian Royal Family. It will stay there until 18:00, during which officials from all over the world, including representatives of the Presidency, Parliament and Government of the Republic of Moldova, are expected. Towards evening, King Michael will be transported to the Throne Hall of the Royal Palace in Bucharest, where he will stay until Saturday, the day of the funeral.

On December 16, the inanimate body of the sovereign will be transported by the Royal Train from the Romanian capital to Curtea de Arges, and in the evening there will be a funeral service from the New Archbishopric and Royal Cathedral.

King Michael of Romania died at his residence in Switzerland at the age of 96. Last year, the monarch withdrew from public life after his health deteriorated.