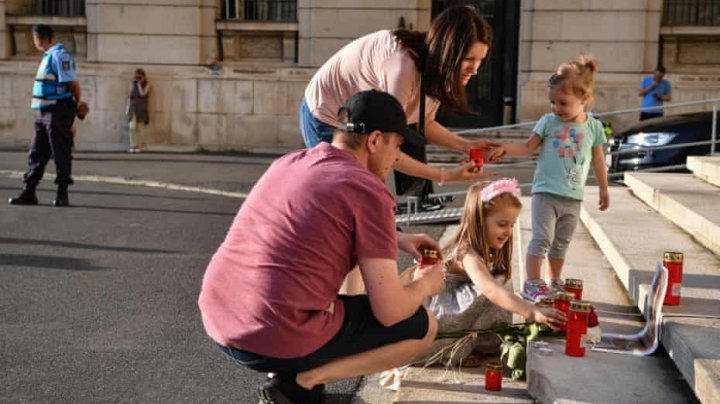 foto: A family lights candles in memory of the murdered girl at the entrance of the ministry of the interior in Bucharest on Saturday. Photograph: Daniel Mihăilescu/AFP/Getty Images
AFLĂ imediat Știrile Publika.MD. Intră pe Telegram

The main suspect Gheorghe Dincă who kidnapped two girls (15 and 18) has admitted killing both of them, according to his lawyer.

"He admitted. He explained that he abducted them to his place, raped them. He hit them after some quarrels and what happened happened", said Bogdan Alexandru, lawyer of Gheorghe Dincă.

Romania’s prime minister is considering calling a referendum on harsher penalties for crimes such as murder, rape and paedophilia. The announcement by Viorica Dăncilă on Saturday followed the sacking of the country’s chief of police after officers failed to respond to several emergency calls from a kidnapped 15-year-old girl who is believed to have subsequently been murdered.

Despite the teenager telephoning police three times to report that she had been abducted, authorities waited 19 hours before attempting to rescue her – a delay that many Romanians believe cost the teenager’s life.

Hundreds of people gathered outside the suspect’s house in the town of Caracal to protest on Friday, writes The Guardian.

In response to widespread national outrage, the interior minister, Nicolae Moga fired the country’s most senior police officer, Ioan Buda. “I called for the sacking of the police chief … because drastic measures are required,” said Moga.

On Saturday Dăncilă demanded an inquiry into the police response and called for punishment for all those responsible, and another two senior officers were abruptly sacked.

The girl, who is identified only as Alexandra, was abducted on Wednesday as she tried to hitchhike home to the town of Dobrosloveni in the south of the country.

On Thursday morning, she rang the emergency number, 112, three times and offered police what information she had about the place in which she was being held by the driver who picked her up. Buda told journalists she had shouted down the phone “he’s coming, he’s coming” before the call was cut off.

Relatives of Alexandra alleged that officers failed to take the alert seriously and reacted too late. A Facebook post by a man identified as the victim’s uncle said: “My niece Alexandra may have been killed while police and prosecutors ‘guarded’ the criminal. A few heads have fallen but not enough!”

Three buildings were searched by officers before they finally pinpointed the property where she had been held, more than 12 hours after her calls.

Police then sought a search warrant – which is not required in emergencies – and then waited until dawn to enter the house, 19 hours after Alexandra’s last call. They found “human remains”, which are being analysed, and jewellery the girl wore, police said.

On Saturday morning, the authorities arrested a 66-year-old mechanic, named as Gheorghe Dincă, and placed him in custody on suspicion of juvenile trafficking and rape.

Later, Dincă’s court-appointed lawyer, Alexandru Bogdan, told reporters that his client had told prosecutors that he did know the girl but that he was not guilty.

There is “evidence to be determined by expertise, like what kind of bones they are,” the lawyer said. “It is premature to discuss about guilt based on these clues.”

The lawyer also added that the victim’s calls appeared to have been made from Dincă’s phone, although his client had not explained this.

As the emerging details of the case continued to provoke alarm and anger, Romania’s president, Klaus Iohannis, issued a statement saying he was “deeply saddened by the tragedy” and “revolted by the fact that, due to some malfunctions, the responsible authorities have failed to save a teenage girl who has lost her life under dramatic conditions”.

The case has also prompted questions over the sudden disappearance of another local teenager who has been missing since April, apparently also after hitching a ride.

Forensic analysts were working to identify the human remains found at the property on Saturday night.