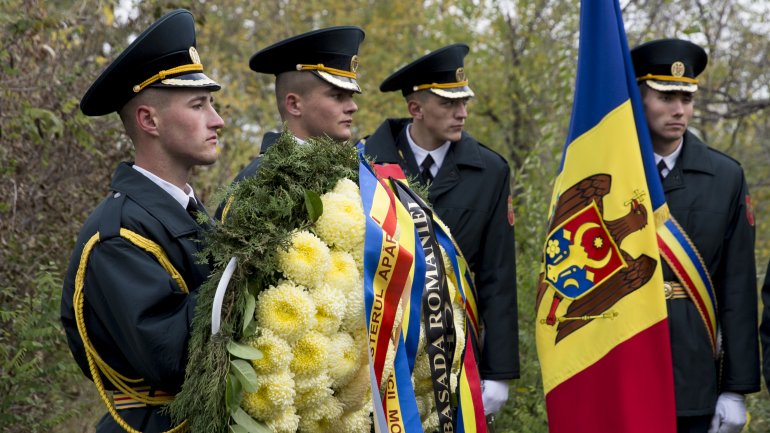 "Real Heroes never die", was the slogan of today's rally which took place in the Romanian military cemetery from Chisinau on occasion of Romanian Armed Forces Day. Romanian Ambassador to Republic of Moldova, Daniel Ioniţă and Deputy Minister of Defense, Gheorghe Galbura attended the event. Along with war veterans, they have set flowers at the monument of the fallen soldier.

Petru Ciobanu, from Chisinau, is of the few remaining veterans from second world war that is still alive. The man claims that he celebrates the Romanian Armed Forces Day every year.

"For me, Romanian Armed Forces Day is one of the main holidays. I was born in Romania, served in the army and survived the war. I deeply respect Romanian army."

During the Second World War Romania's army contained 5000 Moldovan soldiers, out of whom, only around 50 veterans remained.

"All those who served treasure this memory. We wish to pass it along so that the young generation to know of the bravery, patriotism and dignity those who fought possessed" president of War Veterans of the Romanian Army, Mihai Postovan said.

The event was also attended by Romanian Ambassador, Daniel Ioniţă.

"This is a special day, one when we all have to mourn those who defended those lands to their dying breath. To remember everything the Romanian army has done."

Deputy Minister of Defense Gheorghe Galbura declared that no Romanian fallen soldier will ever be forgotten.

"I believe it is the best way to remember them, to pay homage, to keep alive their ideas and defend with dignity, through our actions, our independence and the values that connects us."

On Romanian Armed Forces Day, in Carol Park, Bucharest will be organized a parade.