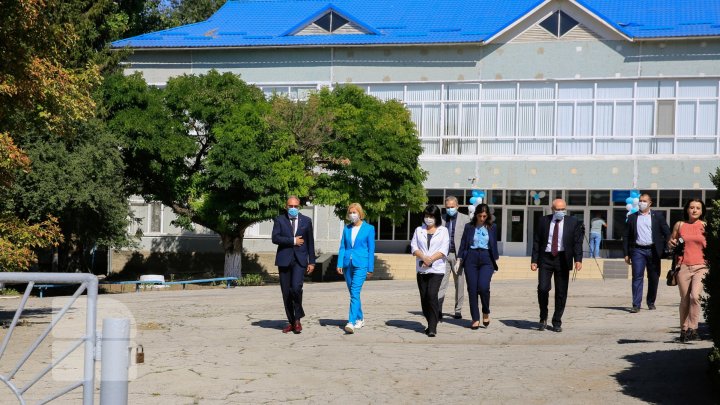 The diplomat visited the "Mihai Eminescu" High School in Comrat, where the construction works of a new school block are in full swing.

The works to extend the only high school with teaching in Romanian in Comrat municipality started two months ago. The project costs 20 million lei: 15 million came from the Romanian Government, and 5.6 million - from the state budget.

"I received assurances from the builder that the works will be completed in due time. We hope that we will participate in the inauguration next year in September", said DANIEL IONIŢĂ, Romanian Ambassador to Chisinau.

There are currently 530 students in a school with a capacity of only 400 places.

"This new block will have the capacity of more than 700 children, with activity room, gym, canteen with 200 seats. With laboratories of chemistry, biology, physics", said  SVETLANA STOIANOV, director of the Theoretical High School "Mihai Eminescu" from Comrat.

Earlier, the People's Assembly of Gagauzia tried to block the project to expand the "Mihai Eminescu" High School due to lack of financial means in the autonomy budget. Subsequently, after the case was publicized, the Ministry of Education announced that it had found the necessary money.

Ambassador Daniel Ioniţă also went to Theoretical High School no. 2 from Ceadir-Lunga. This year, the first class with teaching in Romanian in the district was opened there.

"The Romanian language is a European passport to a better life," said DANIEL IONIŢĂ, Romanian Ambassador to Chisinau.

The first students from Ceadîr-Lunga who will study in Romanian are 26 children from class 1.

During the visit to Gagauzia, Daniel Ioniţă was accompanied by the Governor Irina Vlah. She says that, in the future, classes in Romanian will be opened in other schools in Gagauzia.

"This's the first time we've taken such a beautiful step. I want to say that it is important for our autonomy, for our parents, we must know the state language", said IRINA VLAH, the Governor of UTA Gagauzia.

Daniel Ioniţă also visited the Hospital from Comrat where he participated in the transmission of a batch of medical equipment. The cost of the donation is 45 thousand euros, money provided by the Romanian Agency for International Development Cooperation.