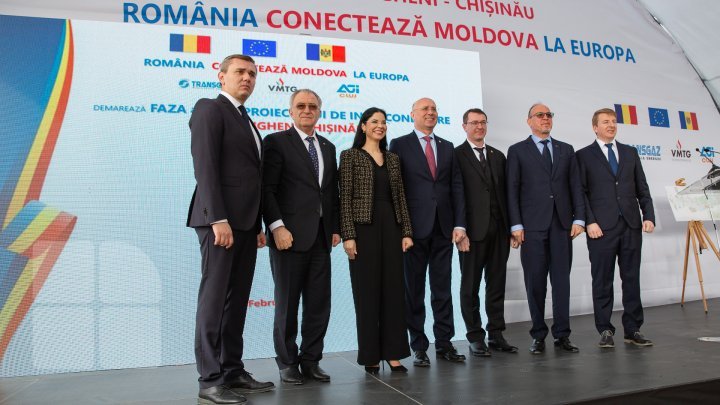 Construction of Ungheni-Chișinău gas pipeline has been inaugurated and declared national interest with slogan Romania connects Moldova to Europe.

Officials confirmed that the project ensures security of Republic of Moldova and offers consumers affordable services.

According to the project, the Ungheni-Chisinau pipeline will 120 km long and carry annually about 1.5 billion m3 natural gas from Romania to our country.

The company Transgaz previously announced to invest 93 million euros in its construction.

"It's second step for energy security of the Republic of Moldova. It means our country will make decisions to benefit our citizens without risks of danger because we have alternative source", said Pavel Filip, prime minister.

Deputy Prime Minister of Romania Ana Birchall declared that Moldova gets closer to the European Union by this project.

"I would like to reiterate Romania's firm commitment to support integration process of the Republic of Moldova. We welcome results recorded on reform agenda of Republic of Moldova, emphasizing that this effort must be continued", said Ana Birchall, deputy prime minister of Romania.

Transgaz Director assures that pipeline construction will be completed by the end of this year.

"We hope that it will be ready by the end of this year. The privatization contract foresees 23 months from the effective date of the works. With support of Moldovan authorities, we can implement earlier", said Ion Sterian, general director of Transgaz.

Ungheni-Chisinau pipeline is the second step of Iasi-Ungheni gas pipeline construction inaugurated on 27 August 2014. It was the first phase of gas system interconnection Moldova - EU through Romania.

In September 2018, the procedure for the acquisition of Vestmoldtransgaz State Enterprise by Transgaz Romania was completed, which took over the construction of the Ungheni-Chisinau gas pipeline.