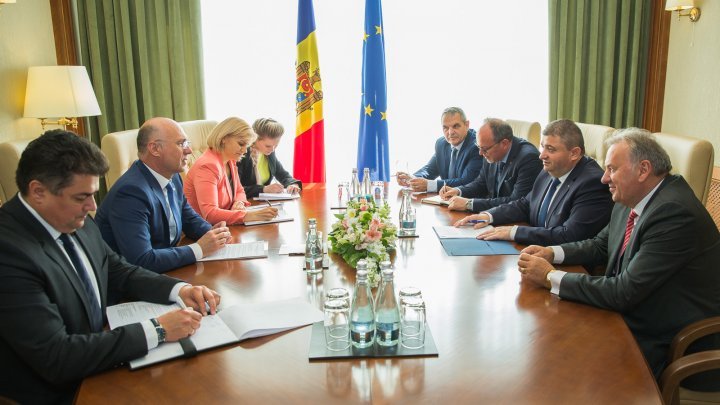 Developments in the implementation of Moldova-Romania energy interconnection projects were examined today by Prime Minister Pavel Filip and Romanian Economy Minister Dănuţ Andruşca on his visit to our country.

Prime Minister Pavel Filip noted the special importance of these projects for ensuring the energy security of the Republic of Moldova.

The main emphasis in this regard is on achieving the extension of the Iasi-Ungheni gas pipeline to Chisinau.

In this context, Pavel Filip once again welcomed the privatization decision by Eurotransgaz SRL (with the sole founder of SNTGN "Transgaz" SA) of the Vestmoldtransgaz.

The officials referred to the four stages of project implementation: the fulfillment of the suspensive conditions, the reorganization of Transgaz, the procurement procedures and the start of the construction works, no later than September 2018.

Currently, the authorities are on the last few steps in terms of realizing the suspensive conditions of the privatization contract. "It is essential to meet deadlines. This is a project showing good relations for me, "the Minister of Economy of Romania mentioned in the context.

The parties also spoke about the interconnection of the two countries' power systems. In this respect, the importance of dynamizing the collaboration with the Romanian company Transelectrica was revealed.

Other priority projects are aimed at eliminating roaming charges, the construction of a motorway, as well as the railway infrastructure linking the Republic of Moldova and Romania.

The Roaming Tariff Removal Initiative is to be discussed at the next joint meeting of the Chişinău and Bucharest Governments. "So people would feel clear messages of approach," said Pavel Filip.

The prime minister reiterated his gratitude for the assistance provided by Romania, noting that our country has taken over the successful experience of the neighboring state in the implementation of the First House program and the introduction of meal tickets