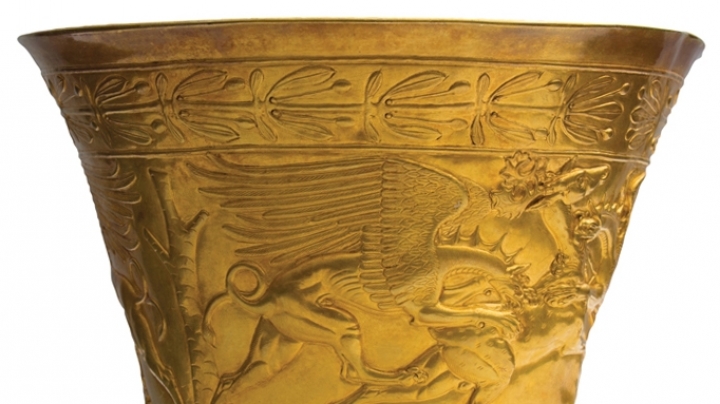 Russian archaeologist Andrey Belinski wasn’t sure what to expect when he found himself facing a small mound in a farmer’s field at the foot of the Caucasus Mountains. To the untrained eye, the 12-foot feature looked like little more than a hillock.

To Belinski, who was charged with excavating the area to make way for new power lines, it looked like a type of ancient burial mound called a kurgan. He considered the job of excavating and analyzing the kurgan, which might be damaged by the construction work, fairly routine.

“Basically, we planned to dig so we could understand how it was built,” Belinski says. As he and his team began to slice into the mound, located 30 miles east of Stavropol, it became apparent that they weren’t the first people to take an interest. In fact, looters had long ago ravaged some sections.

“The central part was destroyed, probably in the nineteenth century,” Belinski says. Hopes of finding a burial chamber or artifacts inside began to fade.

It took nearly a month of digging to reach the bottom. There, Belinski ran into a layer of thick clay that, at first glance, looked like a natural feature of the landscape, not the result of human activity. He uncovered a stone box, a foot or so deep, containing a few finger and rib bones from a teenager.

But that wasn’t all. Nested one inside the other in the box were two gold vessels of unsurpassed workmanship. Beneath these lay three gold armbands, a heavy ring, and three smaller bell-shaped gold cups.