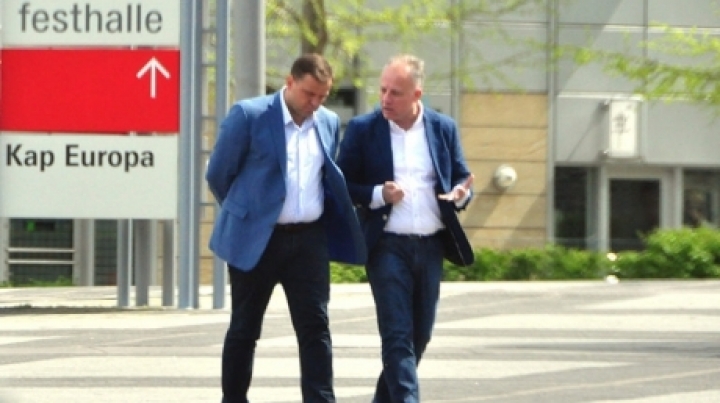 Andrei Nastase, leader of the "Dignity and Truth" Party is not only one of the candidates for presidential elections, but also one of the richest. Besides connections to offshore accounts which fed his family with hundreds of thousands of euros, Andrei Nastase is closely linked to Viorel and Victor Topa's business, being their wedding godson.

The presidential candidate worked forTopa businessmen - convicted of extortion, embezzlement, money laundering and forgery of documents by Moldovan authorities - and represented their interests as a lawyer.

Nastase does not deny these links, but argues that it is only "business" and business partners and that his interest is to get the country out of captivity, writes rise.md.

AIR Moldova case
After leaving the Prosecutor's Office by the summer of 2002, Andrei Nastase was Deputy Director for Legal Affairs at Air Moldova, turned by Victor Topa in a Moldovan-German company.

Unistar controlled by Topa family. Lawyer - Andrei Nastase
Lawyer Andrei Nastase links with the German company and at the same time, with Victor Topa with his family, and it doesn't stop here. Data from the Trade Register in Germany shows that, of August 2nd 2012 to January 6th 2014, Andrei Nastase represented as a lawyer, the interests of  German company Aviation Capital - in fact, the former Unistar.

Accounts and his mother's house

In his wealth statement submitted to the Central Election Commission, Andrei Nastase said that owns, together with his wife Angela, ten buildings, of which five in Mandreşti village, Telenesti district, an apartment in Chisinau, two thirds of a house of 159 meters square, two-thirds of two buildings and two thirds of a garage in the Bubuieci commune in Chisinau.

Andrei Nastase: "I have never hidden that my house is registered on my mother. I could have registered the home on my name, but it was a protection from possible attacks. I have no other possessions in the country, or abroad."

Andrei Nastase's name is linked to a series of financial transactions made by offshore companies, which were mirrored in investigators.

Thus, according to an investigation conducted by the Moldovan authorities on a number of transfers made to accounts in Moldova company Aero Flight Limited of Gibraltar, Andrei's mother, Anna Nastase received the sum of 101,000 euros in the accounts at two  Moldovan banks. Other 1.37 million lei entered into the accounts of the Euroleasing company (in the form of "loan repayment") and another 3.35 million lei were deposed by Andrei Nastase.

Andrei Nastase: They were never five million lei. There were only 200,000 euros, half on my mother's accounts, and another half on my mother in law accounts. They are the payment for services rendered to Aero Flight Limited Company. It's a foreign company, but I don't know who does it belongs to. The money was placed on accounts. Everything was legal. The transfers were checked by National Anticurruption Center. As about Euroleasing, I removed  the money from one bank accounts and gave to another company because they offered a higher interest rate. There, he was director Vladimir's brother Victor Topa. They are the same money I got from Aero company, but converted into lei.

Another business relationship with Victor Topa is the Jurnal TV. Andrei Nastase said that this is more of a soulful relationship. The closer relationship with Jurnal TV is because it belongs to his godfather, but that without this TV station in Moldova was dark. Journal supports not only me. "

The owner of Jurnal TV station is Victor Topa. The  bussinessman controls the television through the German company Media Management Rheinstein Germany GMBH, founder of Jurnal de Chisinau Plus SRL holding, that owns as a shareholder, the TV station.