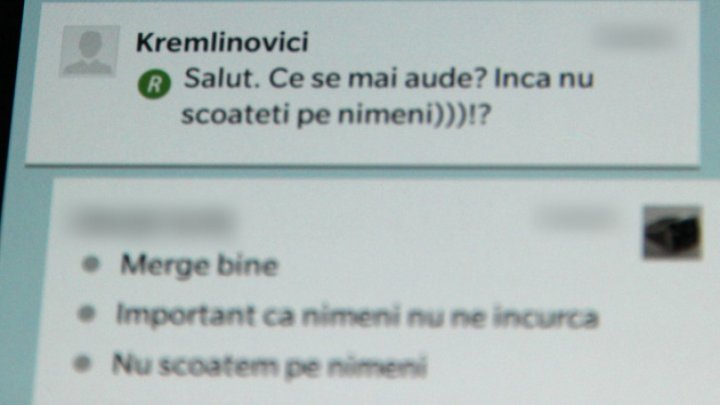 The Kremlin administration would have a so-called "Moldovan department", which controls the political situation in Moldova, moderates and coordinates the speeches of some politicians in Chisinau.

At least that is what an investigation by the "Dossier" Center in Russia and RISE Moldova shows.

According to journalists, the key figure in Chisinau who would collaborate with these Russian services would be President Igor Dodon.

The data comes from the so-called "Chernov Archive" and from the memory of Igor Dodon's mobile phone. He allegedly used a Blackberry smartphone until 2017, where he was registered under the pseudonym "Kremlinovich".

According to the investigation, the coordinator of the "Moldovan department" would be FSB General Vladimir Chernov, head of the presidential department for interregional and cultural relations with foreign countries. The structure includes a network of agents who would collect information about several politicians in Moldova and would draw the main ideas that must be respected by political actors in Chisinau, loyal to Moscow.

The investigation shows that President Igor Dodon has been collaborating with the Russian services since he was a member of the Communist Party, and is currently coordinating his actions and speeches with the FSB.

For example, the "Dossier" center writes that in February 2019, three days before the Munich Security Conference, Igor Dodon allegedly sent the text of the speech to General Vladimir Chernov through the Russian Ambassador to Moldova, Oleg Vasnetov.

Another leak is the characterization made of Igor Dodon reached the table of General Vladimir Chernov. It states that "in Moldovan political circles, Igor Dodon enjoys the reputation of a reliable politician who puts his personal interests and ambitions above all else."

According to journalists, among the representatives of the Russian intelligence services dealing with Moldova are Vasili Kashirin, who also holds the passport of the unrecognized Transnistrian region, Alexei Negodov, Andrei Rusakov, but also Svetlana Voronina.

The source also claims that, recently, a group of "political strategists from Moscow" arrived in Chisinau and allegedly joined Dodon's campaign staff. His representatives reject all allegations in the investigation.

Ludmila Muntean, the spokesperson for the independent presidential candidate, told Publika TV that these so-called investigations are just campaign fakes, promoted in support of some opponents.

"Their actions are ridiculous and desperate and will be taxed by voters," Muntean added.

We also asked for a reaction from the Embassy of the Russian Federation in Chisinau, but so far we have not received an answer.