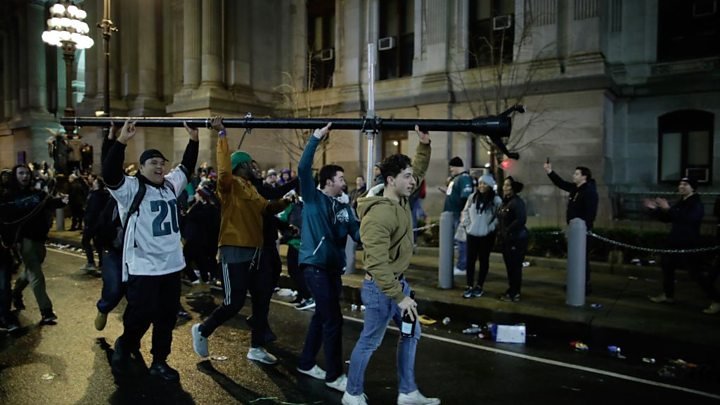 Incidents of rioting and looting have taken place in the US city of Philadelphia as fans celebrated a historic Super Bowl win on Sunday, wrote BBC.

A police officer is among those reported injured. Cars and shopfronts have been destroyed and looted.

Almost 10,000 tuned into a public police radio, with #phillypolicescanner trending nationally on Twitter.

Despite bracing for chaotic celebrations, authorities were overwhelmed following the Eagles's 41-33 win against the New England Patriots.

One officer was heard saying on the police scanner: "It's endless, chief. Endless.

Some fans jumped into crowds from a height, but not without injury, as one police officer reported, saying: "This is extremely horrible. We need rescue here, we got someone horribly injured from a fall."

Unconfirmed reports of an explosion in the 9th district have been attributed to a power line, while others suggested that it may have been a firework set off in celebration.

Looting and destruction was reported at multiple convenience shops, as well as at the department store chain Macy's.

There were also unconfirmed reports of two police horses being stolen and recovered.

One woman filmed the Ritz Carlton Hotel's awning collapsing under the weight of dozens of revellers, some of whom were previously seen jumping off it. The incident was also reported by NBC's local TV station.

There was also some backlash on social media, with many criticising some Eagles fans' inability to celebrate responsibly.