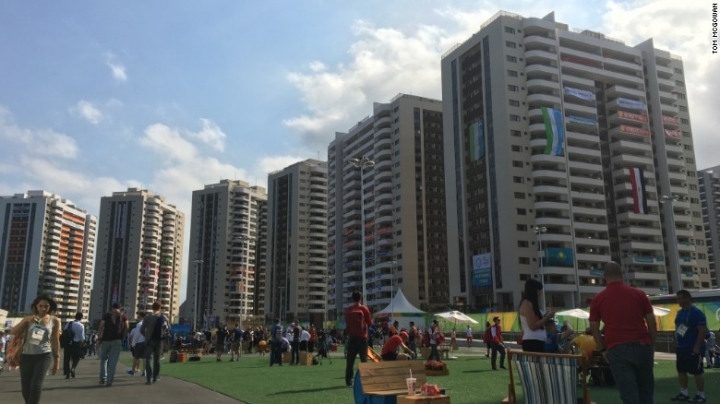 It has its own florist, a beauty salon and even a McDonald's. But this is no ordinary village, CNN reports.

The Rio 2016 Athletes' Village is where the soon-to-be heroes of these Games are housed, a series of high-rise tower blocks accommodating the finest athletes on the planet.

"It feels like a little mini college town," Team USA tennis player Denis Kudla told CNN hours after arriving in Brazil. "But instead of a bunch of students, it's the greatest athletes in the world, in every sport. So it's incredible to be here."

The likes of Usain Bolt and Michael Phelps will call this place home for the next fortnight as they make their bids for Olympic history, staying alongside Olympians who are happy just to be here at all.

In front of the huge residential complex is an area that serves as a de facto town square. There's a grocery store, a dry cleaners and the aforementioned fast food restaurant with a queue stretching out of the door.

And for those who want to make a fashion statement in front of the world's television cameras, there are separate men's and women's salons to help athletes cultivate their Olympic looks.

And just one day before the Olympics officially begin with the Opening Ceremony at the Maracana Stadium, the mood is light and positive, a sharp contrast to the recent headlines that called into question the readiness of the accommodation.
The Australian Olympic Team initially refused to move into its block saying problems with gas, electrics and plumbing made the rooms untenable.

Despite these setbacks, Australians are now settled in the village, in the same building as Evelina Afoa and Irene Prescott, swimmers from Samoa and Tonga respectively.

And both are happy to report none of the problems faced by Australian athletes upon their arrival.
"Our rooms were fine," Prescott, who's competing in 50 meters freestyle, explained. "We're staying in the same building with the Aussies. It's actually fine."
"Everyone has been really friendly as well," added Afoa. "I kind of expected people not to talk but everyone has been really approachable and friendly."

"It's been pretty awesome," said Prescott, with the giant national flags that adorn the apartment complexes visible over her shoulder.
"This is my first Olympics so I didn't really know what to expect. It's very big, very colorful and very beautiful."

And while Prescott and Afoa are enjoying the experience as well as the competition, other athletes have a singular focus and realistic medal hopes.