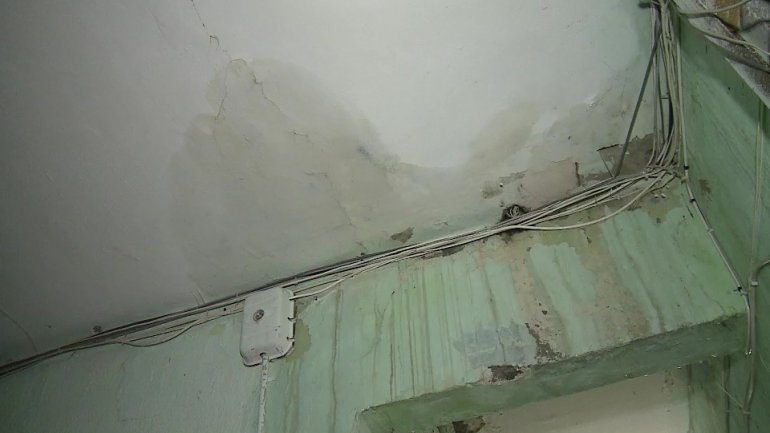 Residents of an apartment block from Ciocana sector of the Capital for nearly 10 years are flooded whenever it rains. Due to the damaged roof, water is leaking in the apartment block starting the top floor.

People have to set up dishes, so that water will not reach the transformer, placed on the wall of the block.

"In spring when snow melts we are again flooded. Many times it messes with electric wires and it happened before that we were left without electricity. Now outside it rains slightly, yet here it leaks more, as water gathered on top" resident Raisa Călin declared.

Raisa Călin has lived for the past 17 years on the last floor of the apartment block on Alecu Russo 55/1 Street. The woman claims that during those years the roof was never once repaired. A fact confirmed by other residents.

"The water leaks. You can see it above the doors. We could not sleep for the past 2 days, as water had to be gathered and trained. It is a nightmare. Whenever we called SEL, we were ignored" resident Ala Gromada announced.

The water run down to the neighbors for the 8th floor.

"I live on the eight floor and everything is soaked, you can see the doors and floor. We come out with all neighbors and collect the water, afterward draining it" resident Vera Antonova said.

The apartment block's roof was not repaired for 34 years, since it was built.

Two years ago they received three cans of tar, from the homeowners association, but it there was not enough.

"There is a dip where water gathers and has nowhere to drain, therefore it leaks all the way to the fifth floor. We stood without electricity for two weeks" resident Valerii Nasechin said.

The apartment block is owned by homeowners association. People claims that they have multiple times for help, but the association always requested money for capital repair works.

Due to lack of money, people have attempted to fill in the wholes in the roof themselves.

"Those plates from the roof must be repaired. You can see in joints how they leak. Even the pipe that should drain the water is cracked all over" Valerii Nasechin added.

Requested by our team, president of the homeowners association, Viorel Velniciuc declared that they didn't have money to repair the roof.