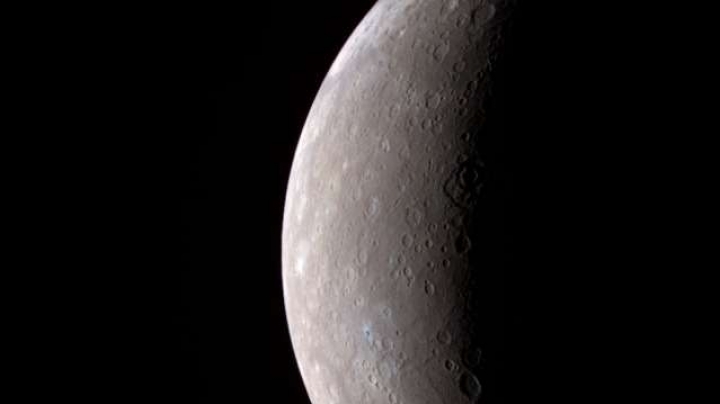 Around 4.6 billion years ago, the universe was a chaos of collapsing gas and spinning debris. Small particles of gas and dust clumped together into larger and more massive meteoroids that in turn smashed together to form planets. Scientists believe that shortly after their formation, these planets—and particularly Mercury—were fiery spheres of molten material, which cooled over millions of years.

Now, geologists at MIT have traced part of Mercury's cooling history and found that between 4.2 and 3.7 billion years ago, soon after the planet formed, its interior temperatures plummeted by 240 degrees Celsius, or 464 degrees Fahrenheit.

They also determined, based on this rapid cooling rate and the composition of lava deposits on Mercury's surface, that the planet likely has the composition of an enstatite chondrite—a type of meteorite that is extremely rare here on Earth.

Timothy Grove, the Cecil and Ida Green Professor of Geology in MIT's Department of Earth, Atmospheric, and Planetary Sciences, says new information on Mercury's past is of interest for tracing Earth's early formation.

For their analysis, the team utilized data collected by NASA's MESSENGER spacecraft. The MErcury Surface, Space ENvironment, GEochemistry, and Ranging (MESSENGER) probe orbited Mercury between 2011 and 2015, collecting measurements of the planet's chemical composition with each flyby. During its mission, MESSENGER produced images that revealed kilometer-thick lava deposits covering the entire planet's surface.

You can read the full article on phys.org.