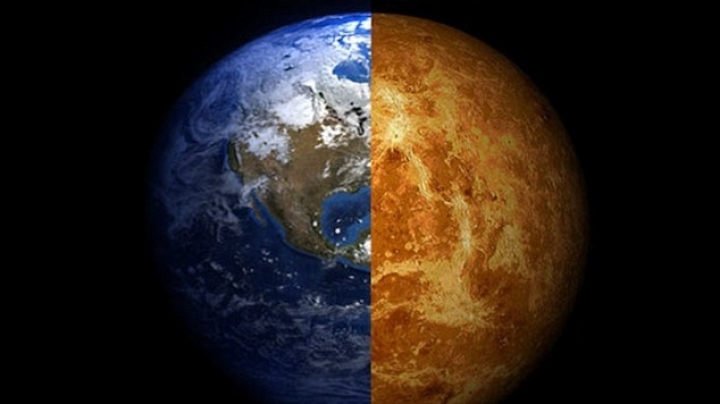 If conditions had been just a little different, life could exist on a lush, green Venus and Earth would be a dead planet, a new theory has claimed, DailyMail reports.

Researchers say that minor evolutionary changes could have altered the fates of both Earth and Venus - and hope to soon be able to model them.
This could make the search for alien life far more fruitful, and rewrite the theory of 'goldilocks zones' where life can exist.

The hypothesis by Rice University scientists and their colleagues is published in Astrobiology this month.

'Although the paper is about planets, in one way it's about old issues that scientists have: the balance between chance and necessity, laws and contingencies, strict determinism and probability.
'But in another way, it asks whether, if you could run the experiment again, would it turn out like this solar system or not? For a long time, it was a purely philosophical question.

'Now that we're observing solar systems and other planets around other stars, we can ask that as a scientific question.
'If we find a planet (in another solar system) sitting where Venus is that actually has signs of life, we'll know that what we see in our solar system is not universal,' he said.

By extension, a similarly small variation could have changed the fortunes of Venus, Earth's closest neighbor, preventing it from becoming a burning desert with an atmosphere poisonous to terrestrials.

The paper also questions the idea that plate tectonics is a critical reason Earth harbors life.
'There's debate about this, but the Earth in its earliest lifetimes, let's say 2-3 billion years ago, would have looked for all intents and purposes like an alien planet,' Lenardic said.
'We know the atmosphere was completely different, with no oxygen.
'There's a debate that plate tectonics might not have been operative.
'Yet there's no argument there was life then, even in this different a setting.
'The Earth itself could have transitioned between planetary states as it evolved.

'So we have to ask ourselves as we look at other planets, should we rule out an early Earth-like situation even if there's no sign of oxygen and potentially a tectonic mode distinctly different from the one that operates on our planet at present?