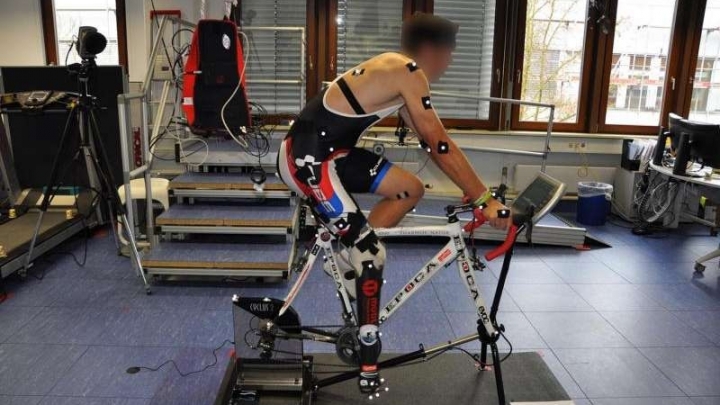 Disabled cyclists will be among those competing at the Paralympic Games in Rio de Janeiro in September 2016. Ensuring top performance calls for prosthetics of superior design, but tailoring them to handle the combination of movements cyclists make has always been a problem. Now, in a new movement lab, a test prosthesis is helping to quickly and precisely optimize these artificial limbs.

When you have a prosthetic limb, riding a bike is particularly challenging. Although there are professional models available that are designed for cyclists, it's not easy to find an artificial limb that is ideal for athletes. Since physical limitations vary from cyclist to cyclist, athletes must have many different versions of these expensive prosthetics made, so that they can test out which is the most suitable, reports phys.org.

Researchers at the Fraunhofer Institute for Manufacturing Engineering and Automation IPA in Stuttgart have built a mobile, biomechanical measuring station and developed a suitable test prosthetic. Coordinated by Dr. Anja Hirschmüller of the Medical Center at the University of Freiburg, the work was carried out in collaboration with the Center and the cycling division of the National Paralympic Committee Germany (DBS). "We can adjust the test prosthesis perfectly for each person," explains Fraunhofer IPA scientist Florian Blab. "For the first time, we're taking the athletes' subjective perceptions to a scientific level." Before now, it has been up to orthopedic technicians to adjust each prosthesis by hand.

The combined goal of the researchers working on the project is to establish objective parameters that will allow them to test both how well a prosthesis fits and how the athlete moves. Using these parameters, they can adjust the prosthesis to precisely match the wearer's physical characteristics, training level and body weight. In the movement lab, the athlete sits on a stationary bike – a cycloergometer – with markers attached to different points on their body. As they pedal, eight to twelve infrared cameras record the position of each marker to within half a millimeter. Sensors on the pedals measure the force the athlete applies to the pedals in all three spatial directions. "This data tells us both how much force the joint exerts and how much work the muscles are doing," says Blab. For instance, if the ergometer registers 300 watts, the scientists can check whether the athlete is generating the 300 watts or if they are having to work harder to compensate for power lost through the prosthesis or incorrect movements.

So they can make sure the prosthetics are adjusted perfectly, the researchers first run the collected data through a software program. This program simulates all possible adjustments and identifies the best three or four, which the scientists then try out in a live test with the athlete. The test prosthesis allows them to quickly and easily adjust the settings without having to change the prosthesis. These settings include the length of the prosthesis, the position of the ball of the foot, and the point at which the sole is attached to the bike pedal.

The researchers will use the German athletes' training camp to collect data prior to the Paralympics. Their aim is to establish a long-term collaboration with the German national paracycling team that continues beyond the 2016 Paralympic Games, and to ensure that future generations of athletes have the prosthetics they need.