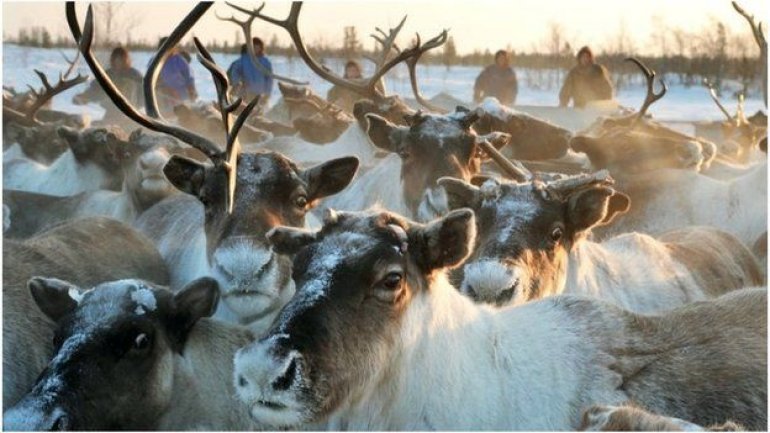 The world's largest wild reindeer herd has fallen by 40% since 2000, scientists have warned, according to BBC.

They say that the animals, which live in the Taimyr Peninsula in the northernmost tip of Russia, are being affected by rising temperatures and human activity.

This is causing the animals to change their annual migration patterns.

The research has been presented at the Fall Meeting of the American Geophysical Union (AGU).

"There is a substantial decline - and we are also seeing this with other wild reindeer declining rapidly in other parts of the world," said Andrey Petrov, who runs the Arctic Centre at the University of Northern Iowa, US.

The Taimyr herd is one of the most monitored groups of reindeer in the world. The animals have been tracked for nearly 50 years by aerial surveys and more recently by satellite imagery.

The population reached a peak of one million in 2000, but this latest research suggests that there are now only 600,000 reindeer.

"Climate change is at least one of the variables," explained Prof Petrov.

"We know in the last two decades that we have had an increase in temperatures of about 1.5C overall. And that definitely impacts migration patterns."

Industrial development is increasing in the region, which is also changing the animals' distribution.

The researchers found that in the summer, the reindeer were moving east to avoid human activity. But they were also shifting north and to higher elevations.

The team thinks this is to try to get to cooler ground and also to avoid the mosquitoes that are booming as the region gets warmer and wetter.

This is extending the distance that the animals have to migrate between winter and summer.

"They now have to travel much longer distances to reach those areas with their newborn calves, and that means there is an increase in calf mortality."

He added that rivers in the region were also growing in size, making them more dangerous for the animals as they had to swim rather than walk across them.

In addition, food in the summer grounds is becoming more scarce, especially as the animals move to higher elevations.

Prof Petrov said it was important to try to halt the decline.

"Reindeer are tremendously important for biodiversity - they are part of the Arctic food chain and without them other species would be in trouble," he explained.

"But on the other hand, in all the areas they inhabit, they are vital for people’s survival.

"Thousands and thousands of people rely on wild reindeer; it is the basis of their subsistence economy. So it's about human sustainability too."