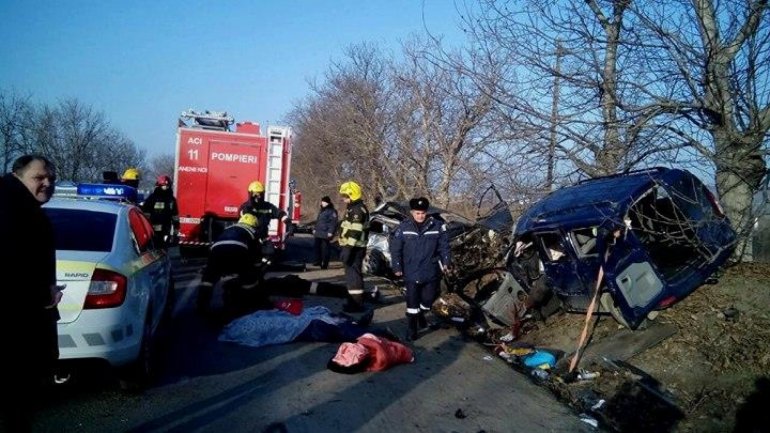 The state of the child's mother who survived the car accident near Todirești village worsened. She was put on life support, but doctors claim that she has low chances of survival.

"Her state worsened overnight. The polytrauma caused the need for her to be put on life support. Doctors are doing everything in their power to save her" spokesman from Institute of Urgent Care Medicine, Petru Craveţ declared.

The second survivor, a 23-year-old woman, is also in critical state, but stable.

The accident which took place in Anenii Noi on Monday, claimed the life of five people. Two cars collided, after one of the driver attempted to perform a dangerous pass and started driving against the traffic. Among the victim counts a 1 year and 5 months old child and her 22-year-old father.

Neighbors and relatives claim that the young family from Gura Bâcului left to Chisinau to see a pediatrician. Despite having their own car, they decided to go with another villager.

One of the neighbors saw the accident: "Cars started stopping and I looked what happened, but didn't know they were from the same village. There was a small blanket at the edge of the road, it was obviously a child was implicated."

The car accident has dumbfounded the Cherdivară family. The house owner, 38, passed away after the impact. The man was driving the Dacia car, when the other speeding car, attempted to pass another vehicle. The victim has recently purchased the car and was taking some villagers to Chişinău. That way, the man earned money to maintain his family. He has two children, one of whom is disabled. His wife, who works as school janitor, has a salary of only 1 000 lei. Now the woman has no idea where to get money for the funeral.

The other family also lacks the financial means to bury the 22-year-old man and his daughter of only 1 year and 5 months. The mother survived, but is currently in critical state. The young man's parents are elders and don't earn much, wrote canal2.md.

Those who wish to help those families with the funerals will be able to make an online donation on the website caritate.md. Their stories will be published shortly.