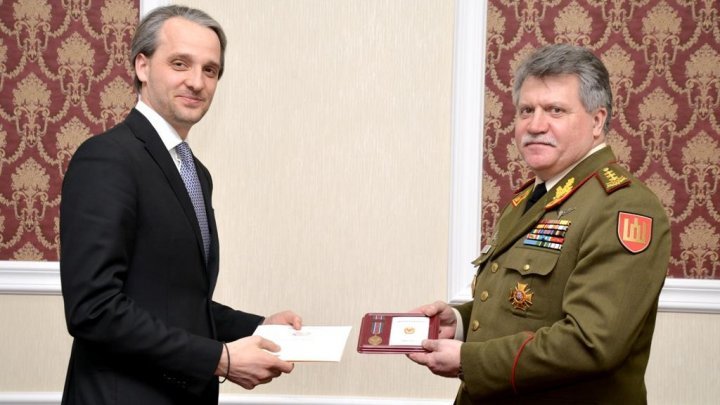 Regional security, defense reform in Moldova have been discussed by the Minister Eugen Sturza and Chief of the Lithuanian Defense Staff Lieutenant-General Jonas Vytautas Žukas on his official visit to Moldova during 26 - 28 March.

Eugen Sturza appreciated Lithuania's support for the modernization and defense reforms in our country, noting that the partnership between the two states registered upward in recent years.

At the event, the Minister of Defense decorated Lieutenant-General Jonas Vytautas Žukas with the medal For Strengthening the Brotherhood of Weapons. The distinction was given for a meritorious contribution to the development of the collaboration between the two armies.

Additionally, the Chief of the Lithuanian Defense Staff discussed with Brigadier General Igor Cutie, the National Army Commander, about the prospect of boosting defense cooperation both at bilateral level and within international organizations.

Brigadier General Cutie underlined during the dialogue the excellent collaboration between the defense institutions of the two countries and thanked General Zukas and the Lithuanian Government for their substantial support to the National Army of Moldova in several important areas such as military education, expert assistance for defense sector reform, training in multinational exercises.

The commander of the National Army also referred to the joint training of the two states' military in the multinational exercises in Ukraine, Bulgaria, Romania, Germany and other countries.

In return, Lieutenant General Žukas said that Moldova is one of Lithuania's important partners.

"Lithuania will maintain its commitment to support the reform of the defense sector of Moldova. We will continue our cooperation in the field of training, education and development of defense capabilities," the head of the Lithuanian Defense Staff said.

Lieutenant General Zukas appreciated our country's contribution to international operations under the aegis of NATO, the EU and the UN, and encouraged the National Army to become more actively involved in the Common Security and Defense Policy (CSDP) and its activities, using the Trust Fund of the CSDP.

The Republic of Moldova and Lithuania cooperate in the military field since November 2000.