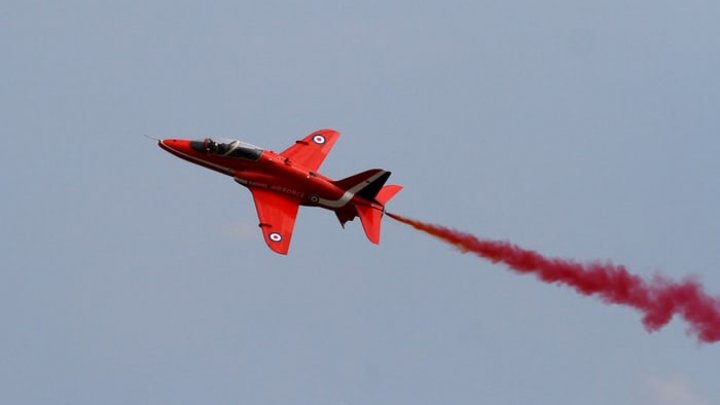 A Red Arrows jet has crashed after an incident at RAF Valley in north Wales, the Ministry of Defence has said.

Two people are understood to have been onboard the Hawk aircraft when it went down shortly before 1.30pm on Tuesday.

The Ministry of Defence said it was investigating the incident and could not confirm whether the occupants ejected from the aircraft.

Rob Jones, the manager of the nearby Anglesey golf club, said his customers had seen a parachute eject from the plane before it crashed on the runway.

He told the Guardian: “I heard an almighty bang. It sounded like a cannon going off – I don’t know if that’s from the ejector seat – but some of the golfers saw a parachute [before the crash].

“I’m overlooking the runway now from about quarter of a mile away. I heard a bang and I went to the door and all I could see was plumes of black smoke coming up. Now the runway is covered in emergency services. There’s a couple of ambulances, I think one’s an air ambulance, a couple of police cars.”

Jones said he had seen the plane flying in the area for a couple of days and that Red Arrows planes would occasionally use RAF Valley, which is on the west coast of north Wales near the Holy Island.

Another witness said they saw someone parachute from the plane before it burst into flames.

The witness told the local Daily Post newspaper: “I was sat at Rhosneigr train station waiting for the train and you can see the airfield from there. I was watching the Red Arrow flying because you hardly ever see them. Then it looked like it was about to land, then next thing I saw was the parachute and then the plane hit the runway and went up in flames.”

An RAF spokesman said: “We are aware of an incident today at RAF Valley involving a Hawk aircraft. We are investigating the incident and it would be inappropriate to comment at this stage.”