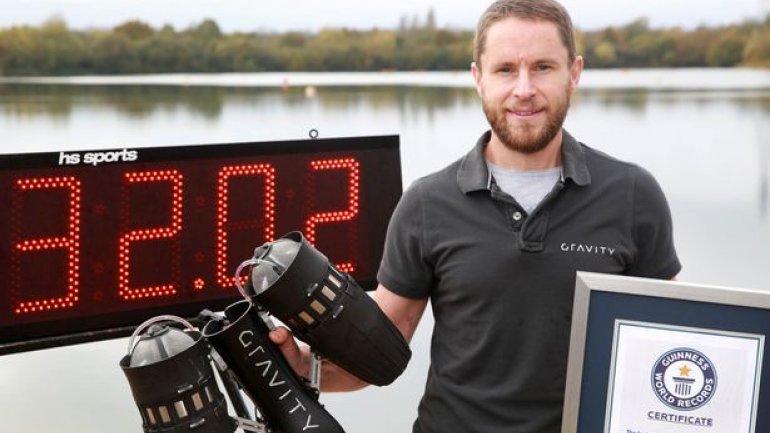 An inventor who built a real-life Iron Man suit so that he could fly through the air like Tony Stark has earned himself a world record, wrote mirror.co.uk

On a dramatic day at Lagoona Park, Reading, British entrepreneur Richard Browning achieved a speed of 51.53 km/h on his third timed attempt, before mistiming a turn and dropping into the lake.

He has been awarded the Guinness World Records title for the fastest speed in a body-controlled jet engine power suit - a brand new title created just for him.

"I've got this vision. It sounds audacious, but let's just stick it out there," said Browning during a Ted Talk earlier this year.

"One day maybe we can rise up above a beach, fly up and down the coastline of it, rise up a bit higher, with some of the safety kit we're working on to make this achievable.

"Then over the horizon comes a Hercules with the ramp down. As it comes past, you start picking up speed and see if we can intercept - from the rear, not the front, that would be a mistake - and then try and land in the back.

"As I say, that's a little way off at the moment."

Browning's company, Gravity, has already secured hundreds of thousands of pounds of investment to develop Daedalus, and recently completed a series A funding round, raising another $650,000.

As the first company to create a suit of this kind intended for commercial use, Gravity is developing protocols in line with the Civil Aviation Authority.

The suit includes an advanced Heads-Up Display that highlights key safety and performance information, including fuel levels and engine operation, and medical bubble detectors have been installed to alert the pilot if fuel is running low.

The suit is also Wi-Fi-enabled, which allows live data streaming from the suit for both ground monitoring and the HUD system.

"I don't think anybody's going to go down to Walmart or take the kids to school in any of this stuff for a while, but the team at Gravity are building some awesome technology that's going to make this look like child's play," said Browning.

"We're working on some things that will seek to bring this unusual experience of flight to a wider audience, beyond the events and displays we're doing."